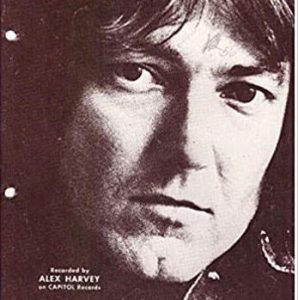 Harvey is known for such classics as “Delta Dawn,” “Rings,” “Hell and High Water” and “Reuben James.” He was featured in such TV series as Dallas, The Dukes of Hazzard and Walker, Texas Ranger, as well as such movies as The Blue and the Gray, The Dollmaker, Parent Trap II and Country.

During a five-decade career, he recorded a dozen albums. He was a colorful showman whose nightclub appearances garnered rave reviews.

Thomas Alexander Harvey was born in Dyersburg, TN. He attended Murray State University in Kentucky, earning a master’s degree in music with a minor in drama. Following graduation, he headed to Nashville. Harvey initially supported himself by transcribing songwriters’ works into sheet-music form.

Songwriter Billy Edd Wheeler (“Jackson,” “Coward of the County”) became his mentor. Harvey also learned from Kris Kristofferson, who was one of the songwriters he transcribed.

When Kenny Rogers came to town to tape a TV show, Harvey deployed his charm and salesmanship to pitch the star “Reuben James.” Rogers and The First Edition made it into a Top 30 pop hit in 1969. Conway Twitty, Wanda Jackson and Jerry Lee Lewis were among those who later recorded Harvey’s lyric of racial harmony.

Alex Harvey earned his first country music credits for “Molly,” recorded by Jim Glaser in 1969 and for “Baby, Baby I Know You’re a Lady,” a No. 1 hit for David Houston in 1970. Dusty Springfield recorded Harvey’s “Someone Who Cares” that same year. It became the theme song for the Jason Robard‘s movie Fools.

In the wake of “Reuben James,” Kenny Rogers recorded more than a dozen Harvey songs. They included the 1970 social-commentary pop hit “Tell It All Brother” and “Hoodooin’ of Miss Fanny DeBerry,” which was included on the million-selling Gambler LP.

Rogers urged him to move to L.A. in 1970. Harvey took acting classes and began seeking TV and movie parts.

Meanwhile, the Memphis pop group Cymarron had a big hit with his “Rings” in 1971. Tompall & The Glaser Brothers covered it for the country field, hitting the Top 10. Lobo, Lonnie Mack, Reuben Howell and Twiggy also recorded “Rings.”

Harvey was signed by Capitol Records on the West Coast. Alex Harvey appeared as his debut LP in 1971. Rogers produced four of its songs, and Wheeler penned its liner notes. “Delta Dawn,” co-written with Larry Collins, was this album’s closing track.

Tanya Tucker launched her career with “Delta Dawn” in 1972. It remains her signature song. In 1973, Helen Reddy turned it into a No. 1 pop smash. It has also been recorded by Loretta Lynn, Bette Midler, Charlie McCoy, Kitty Wells, Waylon Jennings, Dottie West, Teresa Brewer, The Statler Brothers and many others.

“The song started everything off for me,” said Tanya Tucker yesterday (April 5). “I thank God for him, his song, my life, my career and my fans….My life would have been so different without the iconic ‘Delta Dawn’ and her creator Alex Harvey.”

Harvey next signed with Buddah Records, which released Preshus Chlld (1976) and Purple Crush (1977) as his next two albums. But his main focus during this period was on his acting career. James Garner took Harvey under his wing and featured him in the 1982 TV film The Long Summer of George Adams.

Alex Harvey moved back to Nashville in 1983. He reacquainted local audiences with his songs and showmanship. He augmented his distinctive, bluesy vocals with flamboyant costumes and handed out buttons, ribbons and printed programs at gigs.

In 1986 T. Graham Brown had a No. 1 hit with “Hell and High Water,” co-written with Harvey. Willie Nelson recorded “No Place But Texas,” the 1986 Alex Harvey song that was named the official song of the state’s sesquicentennial celebration. It also became the title tune of Harvey’s sixth album.

Tim Ryan had his chart debut in 1990 with their collaboration “Dance in Circles,” and the two became frequent songwriting partners. Billy Ray Cyrus returned Harvey to the country Top 10 via “Somebody New” in 1993, and he returned to the songwriter’s catalog for 1997’s “Bluegrass State of Mind.” Chris LeDoux sang Harvey’s “Five Dollar Fine” in 1999.

In 2015 he created a book as well as an album titled Texas 101. Harvey also hosted syndicated radio and TV series in the Lone Star State.

Alex Harvey’s death on April 4 was revealed yesterday in a Facebook post by his wife, Gineille Sabilino.