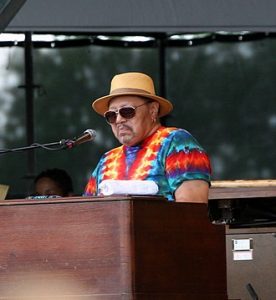 Neville was a part of one of the notable musical families of New Orleans, the Neville Brothers. He was a founding member of The Meters, whose musical style represents New Orleans funk. He also played with the spinoff group The Funky Meters.[1][2]

Neville grew up in New Orleans. He was the son of Amelia Landry and Arthur Neville Sr.[5][6] He started on piano and performed with his brothers at an early age. He was influenced by the R&B styles of James Booker, Bill Doggett, Booker T. Jones, Lloyd Glenn and Professor Longhair.[4][7] In high school he joined and later led The Hawketts. In 1954 the band recorded “Mardi Gras Mambo” with Neville on vocals.[3][8]The song gained popularity and became a New Orleans carnival anthem. The band toured with Larry Williams. Neville performed regularly in New Orleans, joined the U.S. Navy in 1958, and returned to music in 1962. He released several singles as a lead artist in 1950s and 1960s.[4][9]

In early 1960s Neville formed the Neville Sounds. The band included Aaron Neville, Cyril Neville, George Porter, Leo Nocentelli, and Ziggy Modeliste.[3][7] Shortly after, Aaron and Cyril left the group to form their own band.[9] The remaining four members continued playing at the Nitecap and the Ivanhoe nightclubs.[4][9] The band backed up many notable musicians such as Lee Dorsey, Betty Harris and The Pointer Sisters.[3][4] The band had a strong sense of groove and unlike traditional groups each instrument was free to lead and go anywhere musically. Over time the band’s style came to represent New Orleans funk.[3][5]

In the late 1960s the band changed its name to The Meters and released three instrumental albums.[4] Early on, compositions were through live improvisation, however this changed in the early 1970s.[7][9] The band gained notoriety in the rock music community including with musicians Paul McCartney, Robert Palmer and The Rolling Stones.[5] The group released five more albums and disbanded in late 1970s due to financial, managerial and artistic factors.[10] The band’s musical style emphasized rhythm over melody[4] and had a lasting impact on upcoming musical styles such as hip-hop as well as jam bands including Phish, Galactic and Red Hot Chili Peppers.[3][11][12][13]

In 1978 Neville and his brothers Cyril, Aaron and Charles formed The Neville Brothers. Previously, the brothers had worked on The Wild Tchoupitoulasalbum.[9] The group’s debut album, titled The Neville Brothers, was released in 1978. The group released several albums throughout the 1980s and 1990s, including Fiyo on the Bayou and Yellow Moon, and an album in 2004.[14] During this period, Neville performed several shows with the original Meters bandmates including a 1989 reunion at the New Orleans Jazz Festival. Following that performance, Neville, Porter, Nocentelli and Russell Batiste formed The Funky Meters. The lineup changed in 1994 with Brian Stoltz replacing Nocentelli on guitar. Neville performed concurrently with both The Neville Brothers and The Funky Meters.[9]

In a 1995 interview, Neville spoke about the joy of live improvisation. He said “The best part, to me, is when the [rhythm] just evolves into some other stuff.”[7] Neville received a Grammy in 1989 with The Neville Brothers for Best Pop Instrumental Performance.[15] He received a Grammy in 1996 with various artists for Best Rock Instrumental Performance in “SRV Shuffle”, a tribute to Stevie Ray Vaughan.[15]

On December 19, 2018, Neville announced his retirement after more than six decades in the music business. His retirement date also marked the 100th anniversary of the birth of legendary New Orleans piano player Professor Longhair.[16]

On June 25, 2019, The New York Times Magazine listed Art Neville among hundreds of artists whose material was reportedly destroyed in the 2008 Universal fire.[17]

Neville was married to wife Lorraine and had three children, Arthel, Ian, and Amelia.[6] Arthel Neville, born from first wife Doris Neville, is a journalist, television personality and news anchor for Fox News.[18][19] Ian Neville is a guitar player and a founding member of Dumpstaphunk, a New Orleans-based funk and jam band.[20] He occasionally performs with The Funky Meters,[21] Slightly Stoopid, and Dr. Klaw.

JAMES DRUDY   For the Irish soldier who fought in the American Civil War, see James Drury[...]