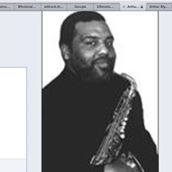 Arthur Blythe (July 5, 1940 – March 27, 2017[2]) was an American jazz alto saxophonist and composer. His instrumental voice had a vibrato and was within the post-bop subgenre of jazz.[1]

Born in Los Angeles,[1] Blythe lived in San Diego, returning to Los Angeles when he was 19 years old. He took up the alto saxophone at the age of nine, playing R&B until his mid-teens when he discovered jazz.[3] In the mid-1960s, Blythe was part of The Underground Musicians and Artists Association (UGMAA), founded by Horace Tapscott, on whose 1969 The Giant Is Awakened he made his recording debut.

Blythe began to record as a leader in 1977 for the India Navigation label and then for Columbia records from 1978 to 1987. Albums such as The Grip and Metamorphosis (both on the label) offered capable, highly refined jazz fare with a free angle which seemed “out there”. Blythe played on many pivotal albums of the 1980s, among them Jack DeJohnette‘s Special Edition on ECM. Blythe was a member of the all-star jazz group The Leaders and, after the departure of Julius Hemphill, he joined the World Saxophone Quartet. Beginning in 2000 he made recordings on Savant Records which included Exhale (2003) with John Hicks (piano), Bob Stewart (tuba), and Cecil Brooks III (drums).

With Santi Debriano and Billy Hart

With David Eyges and Bruce Ditmas

With the Music Revelation Ensemble

With the World Saxophone Quartet