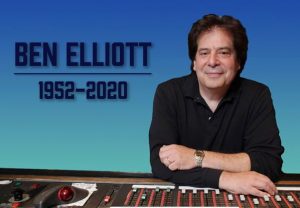 Ben Elliott is an American record producer, audio engineer and co-owner of Showplace Studios in Dover, New Jersey, United States. He has been the chief engineer at Showplace since its opening in 1991. Over the years he has worked with and assisted top producer/engineers such as Rob Fraboni, Jason Corsaro, Andy Wallace, and Eddie Kramer.

Elliott has recorded, mixed and produced artists for over 20 years. He is known for his expertise in diverse musical genres, having recorded classic artists such as Eric Clapton and Keith Richards (for whom he recorded and mixed “You Win Again,” featured on Timeless, the Grammy-winning all-star tribute to Hank Williams, among other projects). Elliott has also recorded and/or mixed albums for Leslie West and Mountain, Peter Green, Mick Taylor, Savoy Brown, Jack Bruce, Rory Gallagher among others.[2]

Elliott has also worked with jazz artists including Grady Tate, Sonny Fortune and Louis Hayes, and mixed a series of Live at the Blue Note albums. He has worked with R&B musicians Ben E. King, Houston Person, Jerry Jermont, Bill Easley, Bernard Purdie and Wilbur Bascomb, among others, and contemporary bands such as Clutch, Robert Randolph, and the Henry Rollins Band.