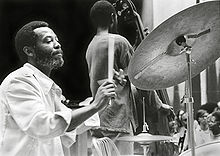 Benjamin Alexander Riley Jr. (July 17, 1933 – November 18, 2017) was an American jazz drummer known for his work with Thelonious Monk, as well as Alice Coltrane, Stan Getz, Woody Herman, Eddie “Lockjaw” Davis, Ahmad Jamal, Kenny Barron, and as member of the group Sphere. During the 1970s he was a member of the New York Jazz Quartet.

Ben Riley was born in the state of Georgia and at the age of four moved with his family to New York City.[1] In high school he played in the school band, and after graduation he joined the army, where he was a paratrooper, and also played with the army band.[citation needed]

Upon leaving the army in 1954 he moved to New York, and in 1956 started playing jazz professionally. He played with such musicians as Randy Weston, Mary Lou Williams, Sonny Rollins, Woody Herman, Stan Getz, Billy Taylor, and Johnny Griffin. What made his name, however, were the four years spent playing, touring, and recording with the pianist Thelonious Monk.[citation needed]