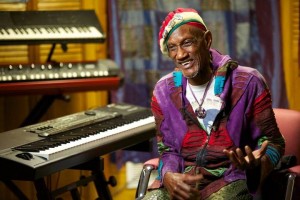 George Bernard “Bernie” Worrell, Jr. (April 19, 1944–June 24, 2016[1]) was an American keyboardist and composer best known as a founding member ofParliament-Funkadelic and for his work with Talking Heads. He is a member of the Rock and Roll Hall of Fame, inducted in 1997 with fifteen other members of Parliament-Funkadelic. Worrell is battling stage-four lung cancer and his wife issued a statement on June 16, 2016, that he was near death.

Worrell was born in Long Branch, New Jersey, and grew up in Plainfield, New Jersey. A musical prodigy, he began formal piano lessons by age three and wrote aconcerto at age eight. He went on to study at Juilliard and the New England Conservatory of Music.

As a college student around 1970, Worrell played with a group called Chubby & The Turnpikes (later to be known as Tavares). The drummer in that band was Joey Kramer, who left in October 1970 to be a founding member of the rock band Aerosmith. After meeting George Clinton, leader of a doo wop group called The Parliaments, Worrell, Clinton, The Parliaments and their backing band, The Funkadelics, moved to Detroit, Michigan, and became collectively known as Parliament-Funkadelic. During the 1970s the same group of musicians separately recorded under the names Parliament and Funkadelic, (among several others), but toured as P-Funk. Worrell played grand piano, Wurlitzer electric piano, Hohner Clavinet, Hammond B3 organ,ARP String Ensemble and Moog synthesizer, co-wrote, and wrote horn and rhythm arrangements on hit recordings for both groups and other associated bands under the “Parliafunkadelicment Thang” production company, and many of his most notable performances were recorded with Bootsy’s Rubber Band, Parlet, The Brides of Funkenstein and The Horny Horns. Worrell recorded a 1978 solo album, All the Woo in the World, with the musical backing of P-Funk’s members.

While funk musicians traditionally utilized electric keyboards, such as the Hammond organ and Fender Rhodes electric piano, Worrell was the second recipient of the Moog synthesizer created by Bob Moog. Mainly responsible for creating Parliament’s futuristic sound, Worrell’s use of the Minimoog bass on the Parliament song “Flash Light“, on 1977’s Funkentelechy Vs. the Placebo Syndrome, heavily influenced the sound of R&B music and served as a bridge between American R&B and the insurgence of new wave, new age and techno. He used the ARP Pro Soloist as well.[2] Worrell’s synthesizer work is prominent on the majority of Parliament’s most popular (and most sampled)[citation needed] songs throughout the 1970s, most notably “Mothership Connection (Star Child)” and “Give Up the Funk (Tear the Roof off the Sucker)” from Mothership Connection (1975) and “Aqua Boogie” from Motor Booty Affair (1978).

When Parliament-Funkadelic took a hiatus from touring in the early 1980s, Worrell was recruited, along with other musicians from differing musical genres such as guitarist Adrian Belew, to perform and record withTalking Heads, a pioneering new wave band. Worrell’s experience and feel for different arrangements enhanced the overall sound of the band. Though he never officially joined Talking Heads, he was a de factomember of the group for most of the ’80s, appearing on one of their studio albums, several solo albums, and multiple tours until they officially disbanded in 1991. Worrell can be seen in the band’s concert film Stop Making Sense. Worrell was invited to perform with Talking Heads at their one-off reunion as part of their 2002 induction into the Rock and Roll Hall of Fame.[3]

Worrell co-produced Fred Schneider‘s 1984 solo album Fred Schneider and the Shake Society and played keyboards and synthesizers on some of the album’s tracks.

Since the late 1980s, Worrell has recorded extensively with Bill Laswell, including Sly and Robbie‘s Laswell-produced Rhythm Killers and the 1985 Fela Kuti album Army Arrangement. Worrell has performed withGov’t Mule. Through the beginning of the 21st century, he has become a visible member of the jam band scene, performing in many large summer music festivals, sometimes billed as Bernie Worrell and the Woo Warriors. He has appeared on several Jack Bruce albums, including A Question of Time, Cities of the Heart, Monkjack and More Jack than God.

In 1994, Worrell appeared on the Red Hot Organization‘s compilation album, Stolen Moments: Red Hot + Cool. The album, meant to raise awareness and funds in support of the AIDS epidemic in the African-American community,[4] was heralded as “Album of the Year” by TIME Magazine.[5]

Worrell joined the rock group Black Jack Johnson, with Mos Def, Will Calhoun, Doug Wimbish and Dr. Know. He appears with the band on Mos Def’s 2004 release The New Danger.

Worrell appears in the 2004 documentary film Moog with synthesizer pioneer Bob Moog and several other Moog synthesizer musicians. In 2011, he toured with Bootsy Collins, another major figure from Parliament-Funkadelic.

Since 2011, Worrell has been performing with his group, the Bernie Worrell Orchestra. The band has become known for the appearance of special guests at live performances, who have included Bootsy Collins,Tina Weymouth, Chris Frantz, Jimmy Destri, Mike Watt, Rah Digga and Gary Lucas.

Since 2014, Worrell has been working on the Seattle based Khu.éex’ project fusing traditional Tlingit music with Funk, Jazz, and Experimental music. The protect includes Preston Singletary, Skerik, Stanton Moore, and Randall Dunn among others.

In 2015, Worrell appeared in the movie Ricki and the Flash as the keyboard player in Meryl Streep‘s band. The movie reunited Worrell with director Jonathan Demme, who had directed Stop Making Sense.

Worrell was a judge for the 12th, 13th, and 14th annual Independent Music Awards.

During May 2016, the New England Conservatory of Music gave Worrell, who studied at the school until 1967, an honorary Doctor of Music degree.[6]

In January 2016, Worrell was diagnosed with stage-four lung cancer.[7] He relocated from New Jersey, his long-time home,[8] to Bellingham, Washington.[9]

A tribute and benefit concert to raise funds for Worrell’s cancer treatment, produced by the Black Rock Coalition and featuring musicians with whom Worrell has worked over his career, occurred on April 4 and 5, 2016.[9][10]

On May 9, Worrell’s wife Judie posted an update on his condition on his Facebook page:

As of Friday, Bernie can barely speak. Tumor has grown and Recurrent laryngeal nerve is pressing on vocal cord, paralyzing it. Treatment starts Tuesday to (hopefully) shrink tumor before it gets to other vocal cord and/or shuts down breathing. VERY difficult time for him.

I am updating y’all because many asked BUT do not consider this an invitation to bombard us with treatment ideas. Bernie is deciding what treatment he wants. I will delete any more messages that do not respect his decision(s).[11]

Judie Worrell issued a statement on Facebook on June 16 to friends and family that “I was just told that Bernie is now headed ‘Home’.”[12] She encouraged people close to Worrell to “visit him to say your goodbyes” and added that he is too ill to speak on the phone or text.[12]He died at the age of 72 on June 24, 2016

Stranger: Bernie Worrell on Earth is a documentary film about Worrell’s life, music and impact. At AllMovie, critic Mark Deming wrote that the film “profiles his life and career while also examining how even a genius has to find a way to make a living”.[13]

Selected contributions to other albums[edit]