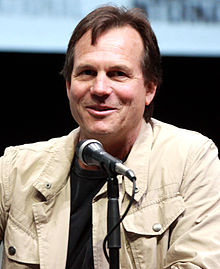 Paxton (the child seen raised above the crowd) before JFK emerges from Hotel Texas on November 22, 1963

Paxton was born and raised in Fort Worth, Texas, the son of Mary Lou (née Gray) and John Lane Paxton. His father was a businessman, lumber wholesaler, museum executive, and occasional actor.[4] His mother was Roman Catholic, and he and his siblings were raised in her faith.[5] Paxton was in the crowd when President John F. Kennedy emerged from the Hotel Texas on the morning of his assassination on November 22, 1963. Photographs of an eight-year-old Paxton being lifted above the crowd are on display at the Sixth Floor Museum in Dallas, Texas.[6][7]

Some of Paxton’s earliest roles included a minor role as a punk thug in The Terminator (1984) and a supporting role as the lead protagonist’s bullying older brother Chet in John Hughes‘ Weird Science (1985). He also appeared in Aliens (1986) as the sarcastic Private Hudson; except for Lance Henriksen, Paxton is the only actor to play characters confronted by a Terminator (The Terminator), a Xenomorph (Aliens), and a Predator (Predator 2). Paxton worked with director James Cameron on True Lies (1994) and Titanic (1997), which was the highest-grossing film of all time at its release. Four years after appearing in Titanic, he joined James Cameron on an expedition to the actual Titanic. A film about this trip, Ghosts of the Abyss, was released in 2003.[8]

Paxton received acclaim for some of his television performances. Most notably, he had the lead role in HBO‘s Big Love (2006-2011), for which Paxton received three Golden Globe nominations. Paxton also received attention for his performance in the History Channel‘s miniseries Hatfields & McCoys (2012), for which he was nominated for an Emmy Award, alongside co-star Kevin Costner. He directed a number of short films, including Fish Heads, which aired during Saturday Night Live‘s low-rated 1980–1981 season. He directed the feature films Frailty (2001), in which he starred, and The Greatest Game Ever Played (2005).[8]

He was cast in a music video for the 1982 Pat Benatar song “Shadows of the Night”, in which he appeared as a Nazi radio officer. He appears in the Limp Bizkit video Eat You Alive. In 1988, he and vocalist/guitarist Andrew Todd Rosenthal formed a short-lived rock duo Martini Ranch. In 2014, he played the role of the villainous John Garrett in Agents of S.H.I.E.L.D. He stars alongside Jon Bernthal, Rose McGowan, and John Malkovich as a playable character in the 2014 video game Call of Duty: Advanced Warfare (downloadable “Exo Zombies” mode).[9]

In February 2016, Paxton was cast as Detective Frank Roarke for Training Day, a crime-thriller television series set 15 years after the events of the eponymous 2001 movie; it premiered a year later.[10]