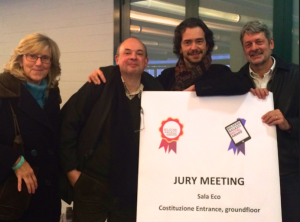 1,417 books from 41 countries and regions of the world
A peek at the latest publishing trends: visual renewal sweeps across all categories, including formats

BOLOGNARAGAZZI AWARD
For over fifty years now the BolognaRagazzi Award has offered a unique opportunity to raise global visibility, making it one of the most sought-after prizes in children’s publishing.  Open only to exhibitors, entries are judged based on the quality of their graphics and editorial content, with priority being given to innovation, balance and the ability to communicate effectively with young readers. Over the years the prize has attracted increasing prestige and attention, so that the BRAW and the special mentions that are also awarded have come to be regarded as a significant business opportunity on the international market, making it a highly desirable recognition.

1,417 books from 41 countries and regions of the world

There are three traditional BRAW categories: Fiction, Non Fiction and Opera Prima (for debut authors only). Books & Seeds was introduced in 2015 to celebrate the World’s Fair, Expo Milano, and a special section, Art, was brought in last year as the first part of a two-year project, with the focus in 2018 being on books about Architecture and Design.  Children’s publishing is looking ever more closely at these subjects, and today offers readers a huge selection of books that delve into the world of architecture and design; special publications that explain the work of architects who changed people’s perceptions of cities by describing them to children and teens through illustrations and photographs; picturebooks depicting public buildings that enhance urban spaces, or private spaces that have come to symbolize how built-up areas can very successfully coexist with nature. The categoryArt, Architecture & Design has received 176 entries, which constitutes a unique international library just waiting to be discovered and enjoyed, and giving children remarkable insights and a deeper understanding of their surroundings and a feeling of actively belonging to them.

This year’s jury is again comprised of a group of international experts: Noma Bar, an Israeli-born graphic designer and illustrator, based in London, whose clever and innovative approach has earned him numerous international awards; journalist Philippe-Jean Catinchi, whose culture columns appear in Le Monde and who has written children’s books; Francesco Franchi, a graphic artist, chief editor at La Repubblica since 2016; Jannik Mulvad,a specialist in web design and the head of the Family and Children’s Books section at the Dokk1 Library in Aarhus; Mariela Nagle, director of the independent children’s bookshop “Mundo azul” in Berlin.

The jury also includes the architect and designer Massimo Iosa Ghini, one of the founders of the cultural movement Bolidism and a member of Ettore Sottsass’s Memphis group, to judge the Art, Architecture and Design books; Luca Boscardin, an Italian architect and toy designer based in Amsterdam; Silvana Sola, founder of the Giannino Stoppani bookstore and is a lecturer on the history of illustration; Veronica Cerruti, head of educational services at the Bologna Musei Institution.

The jury came together on 9 and 10 February at BolognaFiere, paying particular attention to the latest trends driving the sector: illustration is in fact becoming increasingly important, and visual renewal brings with it a highly diversified range of formats. Oversized picturebooks, tiny books, concertina folds and board books in unusual dimensions. Topics drawing particular attention include: “women’s issues”, with books picking up on the latest current affairs and news, right down to the American women’s march and pussy hats, alongside increasingly popular women’s biographies; death – especially from the Asian perspective – tackled head on yet tenderly; and as well, representing a first, books displaying a new interest in the subject of reading and writing.

LOUDLY SOFTLY IN A WHISPER – I SEE THAT (collection)
Written and illustrated by Romana Romayshyn and Andriy Lesiv The Old Lion Publishing House, Lviv, Ukraine

WHO ARE YOU
Written and illustrated by An Hyo-lim Bandal, South Korea


BOLOGNA RAGAZZI DIGITAL AWARD
By its very nature always attuned to the latest cutting-edge developments in books for children and teenagers, the Bologna Children’s Book Fair in partnership with Children’s Technology Review (USA) has since 2012 staged the BolognaRagazzi Digital Award, a special international competition for excellence and innovation in digital content. It is given to the most outstanding publishers and developers of Apps for children and teens aged 2 to 15 who successfully embed valuable learning tools into the playfulness of the digital experience

There are four categories: Fiction, Non Fiction, Education and AR (Augmented Reality).
Another special section, Cinema is being added in 2018 and organized in conjunction with the Cineteca di Bologna as part of the European ABCinema Project. The award also assigns special mentions and a shortlist endorsed by the international jury for making a unique contribution to digital publishing for children.

There are four members of the jury: Warren Buckleitner, Editor of Children’s Technology Review (USA); Lucy Gill, who works on digital product development and founded Digills Consulting; the illustrator Sylvia Van Ommen, a specialist in interactive design and the founder of Fruitcocktail;Roberta Franceschetti, a journalist and content creator, and the cofounder of the website Mamamò; in addition Elisa Giovannelli and Giuliana Valentini from the Cineteca di Bologna are part of the team with a specific focus on the ABCinema proect. The Jury screened 116 entries from 21 countries, and chose 5 winners, 6 special mentions and a shortlist of 7 candidates. Each of the chosen titles is rewarded for making a contribution to children’s publishing by bringing to light the potential embedded in emerging technologies at the service of the young and very young .