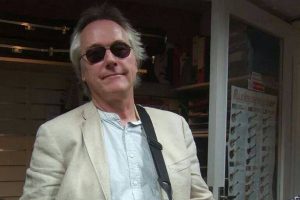 Rowland Charles “Boon” Gould (4 March 1955, Shanklin, Isle of Wight – 30 April 2019)[1] was an English musician and one of the four founding members of Level 42.[2] He was called ‘Boon’ since, at a very young age, an uncle of his commented to his mother that his apparent inability to cry was a ‘real boon for the family’.

Gould was the guitarist of Level 42 and occasional saxophone player on their earliest albums. Boon was the brother of Phil Gould, who was the drummer and also a founding member of Level 42. Gould’s tenure as a full-time member of Level 42 ended in 1987 after a period of sustained illness and nervous exhaustion, culminating in his suffering panic attacks whilst on stage during a tour of the United States. Gould’s health was not helped by his fully adopting the stereotypical lifestyle of a pop-star and a poor diet whilst on tour. He was the first of the original members to quit full-time work with the group, although he continued writing lyrics with the group and was present during studio work for the Staring at the Sunalbum in 1988.

After this he spent time in a monastery and in the desert in the U.S., where he nearly got a record deal.

Gould released two solo albums: Tin Man and Love Kills Overtime, the second under the pseudonym ‘Zen Gangsters’.[3][4] The second album used a number of his brother’s drum samples from his later work with Level 42.

Gould maintained a relationship with Mark King, occasionally seen attending King’s concerts in the late 1990’s and early 2000’s. Gould provided lyrics for King’s album One Man and the full 2004 reunion of the band was officially announced on his website, although this reunion was very brief.

Gould provided lyrics, some guitar work, and some music for the latest Level 42 album Retroglide, although he and King had an agreement that Gould was credited solely for lyrics and King solely for music.

Gould had a daughter named Chani, but was not married to her mother. He married in the early 1990s and had another child named Solomon.

The song “Good Man in a Storm” from the album World Machine alludes to the childhood of both Boon and Phil Gould. In the song, written by Phil Gould, he states (probably to his mother), “There was a vision, flashing by, of a summer’s day I spent with you, with a child who never learnt how to cry.”

In October 2012, Gould joined his longtime bandmates and friends, Mark King and Mike Lindup, for a one off guest appearance in Bristol, UK. Gould performed alongside the band for the classic tunes “Heathrow” and “Love Games”. Although Gould has had a lot of writing involvement with Level 42 after the dissolution of the original lineup, the Bristol show marked his first public appearance with Level 42 in 25 years. Gould’s appearance also coincided with Mark King’s birthday.

TAX BROTHERS And The Old RACOON