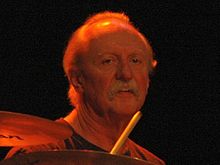 One of Trucks’ first bands was local Jacksonville band The Vikings, who made one 7-inch record in 1964. Another early band was The 31st of February which formed and broke up in 1968. This group’s lineup eventually included both Duane Allman and Gregg Allman. They recorded a cover of “Morning Dew”, by 1960s folk singer Bonnie Dobson.

Together, the two drummers developed a rhythmic drive that would prove crucial to the band. Trucks laid down a powerful conventional beat while the jazz-influenced Johanson added a second laminate of percussion and ad libitum cymbal flourishes, seamlessly melded into one syncopated sound.

Said founding member and co-lead guitarist Dickey Betts of Trucks’ addition to the original band lineup, “…When Butch came along, he had that freight train, meat-and-potatoes kind of thing that set Jaimoe up perfectly. He had the power thing we needed.”[1]

Trucks continued to record and perform with the Allman Brothers Band until they disbanded in 2014.

Along with band members Gregg Allman, Jai Johanny “Jaimoe” Johanson, and Dickey Betts, Butch Trucks was named as plaintiff in a lawsuit against UMG Recordings. The suit, initiated in 2008, seeks $10 million over royalties from CD sales and digital downloads services such as Apple’s iTunes. Trucks sees the license given to users for downloads as legally unsound.[2] Trucks embraced Internet technology for the group and planned to use Moogis.com (now defunct) to make the Web a real venue for the Allman Brothers and other jam bands.[2][3]

Trucks had a long interest in philosophy and literature. In 2005, the New York Times Book Review published a letter from Trucks criticizing Roy Blount, Jr.’s reference to Duane Allman as “one of these churls” in a review of Splendor in the Short Grass: The Grover Lewis Reader. The letter further criticized Grover Lewis for his 1971 Rolling Stone article about the band, which Trucks wrote made the members look like uneducated characters who spoke in dialogue “taken directly from Faulkner.”[6]

Trucks was related to other famous musicians. His nephew, guitarist Derek Trucks, is the frontman and bandleader of The Tedeschi Trucks Band and joined the Allman Brothers Band in 1999. Another nephew, Duane Trucks (Derek’s younger brother), plays drums for Widespread Panic and Hard Working Americans. Trucks’ oldest son, guitarist Vaylor Trucks, is part of a trio called The Yeti Trio based in Atlanta. He was also a nephew of Major League Baseball pitcher and coach “Fire” Virgil Trucks (1917-2013).[7]