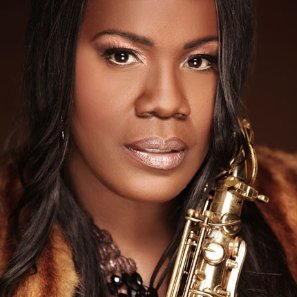 When steps onto the stage with her saxophone in hand, many members of the audience are surprised and when she begins to play, the audience is astounded by the sound, passion and power that come from her saxophone.  Hailing from Baltimore, MD, Corinthia was formally trained as a classical clarinetist at Washington, D.C.’s Howard University where she also received training on the alto saxophone, voice and piano.  While in attendance at Howard, she earned her Bachelor’s Degree in Music Therapy and Performance.  It was at Howard University where she struck up a friendship with Wynton Marsalis, who she ultimately played in concert with while attending Howard.The GRAMMY Award-winning Jazz pioneer inspired and encouraged Corinthia to continue to foster her musical abilities and move to New York where he introduced her to the Jazz world.    While in New York, Corinthia acquired her Master’s Degree from New York University and continued her studies under both Jackie and Renee Mclean as well as Charles Davis and several other Jazz icons. She was given the opportunity to play with several other young Jazz artists at the time including The Harper Brothers, Cecil Brooks, and Regina Carter and started her own band, Chapter 5. She toured throughout the US and performed on countless stages, venues and arenas. Her tour, “Beauty & the Beat, Women in Jazz” in collaboration with Fashion Artist Gwen Black, led her to perform with and open for some of the most influential female artists and musicians of all time such as Dorothy Donegan and Nnenna Freelon. During her “Beauty & the Beat” tour, Corinthia was included in a published work entitled “Such Sweet Thunder: Views on Black American Music” by Mark Baszak & Edward Cohen, in which she was identified as one among Great Women of Jazz.
Known as the First Lady of Sax, Corinthia is a voting member of the Recording Academy and has opened for and performed in concert with Etta Jones & Houston Person, Keith Washington, Kirk Whalum, Jon Faddis, Frank Foster, Marion Meadows, Cyrus Chestnut and the late Wayman Tisdale as well as Gospel artists such as Richard Smallwood, The Clark Sisters and many other ministers of music. She has performed on many recordings as a side woman, however, as a band leader, she has released 2 CDs as an independent artist and 2 singles from her new double CD slated for release in 2016. In 2003, she dropped her first project entitled “Stick It In Ya’ Ear “and in 2011, she released her sophomore project entitled, “Peace of Mind Outside the Lines” featuring Baltimore’s own Jazz pianist extraordinaire Cyrus Chestnut. Songs from her sophomore recording weren’t only featured in the United States, but also in other countries such as Japan, Europe and Latin America. Cromwell received overwhelming reviews for this release and Bob Marovich of BlackGospelBlog.com had this to say about one of the tracks on the artists 2011 release “Another phenomenal performance is the traditional “Tis So Sweet, an instrumental duet between Cromwell on sax and virtuoso pianist Cyrus Chestnut. In their hands, the song lives up to its title in more ways than one” Her latest singles Trinity 3:1 where she once again pairs with Jazz great Cyrus Chestnut and “Great Day” featuring vocalist Crystal Marshall-Brown is featured on several radio stations in London, Switzerland, UK and is climbing the charts.

Corinthia has received several awards and accolades. In 2013 she was recognized by the National Association of Negro and Business Professional Women with the Living Women’s History Makers Community Award in the area of Music. Other accolades include reaching #1 in “All About Jazz” for 4 consecutive weeks in May 2012. She was also featured in Jazz Corner and AOL Music in 2012 and was selected the 2011 Up-and-Coming Jazz Artist of the Year by the Baltimore Jazz Awards. She was honored by Senator Rice of the State of New Jersey and given the Senate Resolution in 2008 for her significant contributions in the field of entertainment.  She was selected as the artist of the month in July, August & September 2003, in the category of Jazz by S&J CD for her project Stick It In Ya’ Ear and has also been featured in numerous newspapers, magazines and other on line media sites.   A vocalist, saxophonist, songwriter, composer, bandleader and producer, Cromwell is putting the finishing touches on her next 2 CDs entitled, “Straight To Smooth” and “Because of the Blood”.  These soon to be released CD’s takes her music ministry to another level and continues to highlight her composing and arranging abilities. Those who loved Corinthia’s ministry in the past will truly enjoy what the new albums offer.  Songs like the inspirational “Just Breathe”, will find the believer relaxing in the security of the arms of the Lord, and “I Am Healed” will have listeners proclaiming health and healing over their bodies and lives. The message of “I Am Healed” resonates with the artist deeply.  “One of the reasons I really am touched by ‘I Am Healed’ is because I believe people are in need of healing today,” says Corinthia.  “This nation is in need of healing.  This world is in need of healing”.  Corinthia believes the song will move people to that wholeness that God desires. Other outstanding songs include jazz originals like Flashmob, So Right and an amazing arrangement of Dat Dere. The songstress includes a track called “Praise Him” on “Because of the Blood” which is an up-tempo song that necessitates praise to the Almighty.  The saxophonist also covers Earnest Pugh’s mega-hit, “Rain On Us”, giving it the “Corinthia” flair with sprinkles of Jazz.  The Jazz classic “Come Sunday”, accented with full orchestra, will be featured on the upcoming release as well.   Corinthia has appeared and been featured on several local and national TV shows to include, WBAL-TV-The Bottom Line with Kweise Mfume, WJZ-TV Channel 13 “On Time” with Kai Jackson and several other local and national shows.

Clearly gifted in the all areas of the arts, her career has also ventured into film with appearances in films such as “Malcolm X”, directed by Spike Lee, “Boomerang” directed by Reginald Hudlin, “Head of State” written, directed and starred Chris Rock  and most recently “It Has Begun” directed by Billy Badd of New Image Films.