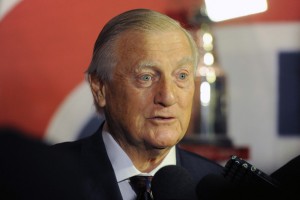 Montreal Canadiens great Dickie Moore is dead at 84, the team announced this afternoon.

The team says Moore died this morning in Montreal.

The Hall of Famer spent most of his 14-year NHL career with the Canadiens, wearing number 12.

There was no immediate word on the cause of death.

Team alumni association president Réjean Houle said Moore had been ill for three months and was living in a seniors home.

Moore is survived by his daughter Lianne, his son John and their spouses and several grandchildren. There was no immediate word on funeral plans.