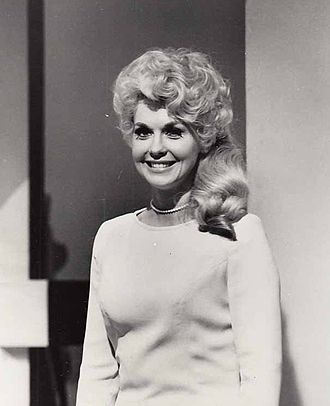 Douglas was born in the community of Pride[3] in East Baton Rouge Parish, Louisiana.[4] She was the only daughter of Emmett Ratcliff Smith, Sr. (1907–1988)[Footnotes 1] and his wife, the former Elma Robinson (1910–2003).[Footnotes 2] Her birth name is listed both as Dorothy Smith and Doris Smith in various articles. She had an older brother and spent much of her childhood romping as a tomboy with him and some male cousins.[3]

Douglas attended St. Gerard High School,[5] a Roman Catholic school, where she played softball and basketball.[4] She was a member of the school’s first graduating class. She married Roland Bourgeois in 1949; they divorced in 1954, shortly after the birth of their son, Danny P. Bourgeois. She was a “Miss Baton Rouge”[4] and was named “Miss New Orleans” in 1957.[6]

Douglas moved to New York City to pursue a career in show business and started out as an illustration model for toothpaste advertisements.[7] She was featured as the “Letters Girl” on NBC‘s The Perry Como Show in 1957, and as the “Billboard Girl” on NBC’s The Steve Allen Show in 1959. These and other television appearances led New York photographers and newspaper reporters to award her the “Miss By-line” crown, which she wore on CBS’s The Ed Sullivan Show.[8]

Film producer Hal B. Wallis saw the Sullivan episode and cast her in the role of Marjorie Burke in the movie drama Career (1959), starring Anthony Franciosa, Dean Martin, and Shirley MacLaine. This was followed by a bit part in the musical comedy Li’l Abner (1959) and the role of a secretary in the comedy/romance Lover Come Back (1961), starring Rock Hudson and Doris Day.

She made numerous television appearances in the late 1950s and early 1960s, including The Twilight Zone episode “The Eye of the Beholder” (1960). She was cast as Barbara Simmons in four 1961 episodes of the CBS detective series Checkmate. Her other credits included in U.S. Marshal, Tightrope, The Adventures of Ozzie and Harriet, Bachelor Father, Adam-12, and Route 66. Douglas also appeared in Thriller, season 1, episode 16, “The Hungry Glass”, which also starred William Shatner,Russell Johnson, and Boris Karloff.[citation needed]

During the 1966 summer hiatus of The Beverly Hillbillies, Douglas made her only starring feature film appearance, cast as Frankie in Fred de Cordova‘s Frankie and Johnny (1966), opposite Elvis Presley.[9] The film proved popular and is among Presley’s most frequently televised movies, but it did little to advance Douglas’s big-screen career.

The turning point in Douglas’s career came when she was chosen to play the role of the beautiful blonde tomboy Elly May Clampett on The Beverly Hillbillies. She starred on the program for all nine seasons along with Buddy Ebsen, Irene Ryan, Nancy Kulp, Raymond Bailey, and Max Baer, Jr. The Beverly Hillbillies became the number one show in the United States in its first two years.[10][11] In 1963 she received one of the first two Miss Golden Globe awards. Hers was for television; the other went to Eva Six for feature films.[12]

In 1981, she returned for a made-for-TV reunion movie, The Return of the Beverly Hillbillies.[9] Douglas was a guest star on a number of other television programs and the subject of paper dolls, dolls, coloring books, and various toys during the heyday of the program. She was also the only cast member to be on all seven of the series’TV Guide covers.

Unlike other “single-role” actors, Douglas never shied away from the public’s identification of her as Elly May Clampett. In a 2003 interview with “Confessions of a Pop Culture Addict,” she summed up her views on the role: “Elly May was like a slice out of my life. She is a wonderful little door opener for me because people love her, and they love the Hillbillies. Even to this day it’s shown every day somewhere. But, as with any abilities, she may open a door for you, but you have to have substance or integrity to advance you through that door.”[13]

In December 2010, Mattel released a new collection of three Barbies called the Classic TV Collection. These dolls were Samantha Stephens (from Bewitched, played by Elizabeth Montgomery), Jeannie (from I Dream of Jeannie, played by Barbara Eden), and Elly May Clampett.[14] Donna Douglas as grand marshal at a parade inLawrenceburg, Tennessee

Douglas received her real estate license after The Beverly Hillbillies finished production.[3] She did not work in that field long, however, as she remained in show business and found other projects.

Douglas frequently performed as a gospel singer and spoke at churches across America. She has recorded several gospel albums, the first being released in 1982.[5] She recorded a few minor country music records during the 1970s and 1980s.[Footnotes 3]

She wrote a children’s book titled Donna’s Critters & Kids: Children’s Stories with a Bible Touch, which has Bible stories featuring animals and is combined with a coloring book for ages two to seven.

Douglas spoke to church groups, youth groups, schools, and colleges.[3] One focus of her charitable work was speaking in support of various Christian children’s homes, mostly in her native American South. She has also appeared at conventions and trade fairs.

In 2013 she published a cookbook, Southern Favorites with a Taste of Hollywood which collects recipes of Southern cooking from show business friends and colleagues such as Buddy Ebsen, Phyllis Diller, Valerie Harper and Debbie Reynolds. The book also has a section on good manners called “Hollywood Social Graces”.[3]

Douglas was a busy yet relatively unknown actress in the 1960s, but after working with actors such as John Forsythe, Efrem Zimbalist, Jr., and Jackie Cooper, she was selected from among 500 young actresses to work alongside legendary actor and dancer Buddy Ebsen on The Beverly Hillbillies. This series ran for nine consecutive seasons, beginning in 1962 and ending in 1971. Douglas remained a close friend of Ebsen for 32 years. In a 2011 interview with The Lincoln Times-News, she described Ebsen as “a wonderful man, very much like my own father, a quiet, reserved, and caring person”.[17] Continually typecast as a result of her Hillbillies role, Douglas decided to focus on her career as a gospel singer.

With the 1973 death of Hillbillies co-star Irene Ryan, and Max Baer’s refusal to participate, Douglas joined Nancy Kulp and Buddy Ebsen as the only original cast members to appear on the 1981 reunion movie, Return of The Beverly Hillbillies. In 1992, Douglas and Baer attended Buddy Ebsen’s 84th birthday celebration inBeverly Hills, California. In 1993, Douglas, Ebsen, and Baer reunited on The Jerry Springer Show, and for a final time in a CBS-TV television special, The Legend of The Beverly Hillbillies, that same year.

In 2003, Douglas’s mother, Emma, and her surrogate father, Buddy Ebsen, both died. She and Baer visited their acting mentor in the hospital, and they each delivered a eulogy at his funeral. A decade later, Douglas revealed the depth of her feelings for Ebsen in an interview with “Confessions of a Pop Culture Addict”:

I loved Buddy Ebsen. He reminded me so much of my own Dad. Most of my scenes were with Buddy, and most of Max’s with Irene. Buddy was just a wonderful man. I related to him so easily. The night before he died Max and I went up to the hospital to see him.[13]

On June 10, 1993, Douglas and her partner, Curt Wilson, in Associated Artists Entertainment, Inc., filed a US$200 million lawsuit against Disney, Whoopi Goldberg,Bette Midler, their production companies, and Creative Artists Agency claiming that the film Sister Act was plagiarized from a book, A Nun in the Closet, owned by the partners. Douglas and Wilson claimed that in 1985 they had developed a screenplay from the book. The lawsuit claimed that there were more than one hundred similarities and plagiarisms between the movie and the book/screenplay owned by Douglas and Wilson. The lawsuit claimed that the developed screenplay had been submitted to Disney, Goldberg, and Midler three times during 1987 and 1988.[18] In 1994, Douglas and Wilson declined a $1 million offer to settle the case. The judge found in favor of Walt Disney Pictures and the other defendants. Wilson stated at the time, “They would have had to copy our stuff verbatim for us to prevail.”[19]

On May 4, 2011, Douglas filed a federal lawsuit claiming that Mattel and CBS Consumer Products used her name and likeness for a Barbie doll in the Classic TV Collection without her authorization. The suit alleged that packaging for the “Elly May” Barbie doll featured a photo of her portraying the character. Douglas maintained she never endorsed the doll or gave Mattel permission to use her name to promote its sale.[20]

On December 27, 2011, Douglas settled her suit against CBS Consumer Products and Mattel, in which she had been seeking at least $75,000. In the lawsuit, Douglas claimed that CBS and Mattel needed her approval to design the doll, while CBS and Mattel maintained that they didn’t need her consent or approval because the network holds exclusive rights to the character. Details of the settlement were confidential; both sides claimed to be content with the outcome.[15]

In addition to her frequent traveling for celebrity appearances and speeches, Douglas enjoyed gardening, spending time with friends and family, and answering her fan mail.[3] On January 1, 2015, Douglas died at the age of 81, of pancreatic cancer.[21]