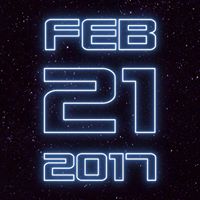 Tri-Coastal Games, a two man Canadian indie developer, who have been creating their vision for the action Sci-Fi, story driven, title, Dystoria for two years, are pleased to announce their game’s imminent release on Steam, on 21st February, priced at $14.99/£10.99/€14.99.

Master the Art of Six Axis piloting as you explore and navigate the universe collecting orbs and destroying enemies in a mesmeric fast paced challenge, accompanied by  a soundtrack that will heighten the senses.

“Dystoria has been inspired by 80s movies and games along with titles like Tron, Descent, Star Wars, Super Mario Galaxy, and we are intent on offering an exhilarating experience, both visually and audibly. Already we are pleased to hear the media say in positive terms they can’t think of any game out there – like this!” Daryl Wilson of Tri-Coastal Games.

Based in Three Hills, Canada, Tri-Coastal Games is a studio that consists of two guys who are passionate about making fun and unique indie games. Craig Grierson and Daryl Wilson started working together in 2014 with a shared love of retro-themed sci-fi games. After prototyping a few concepts they settled on the unique axis-shifting gameplay of Dystoria as a basis for TCG’s debut title.