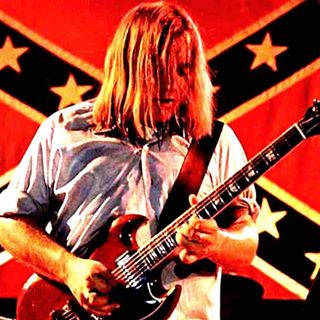 Edward C. King (born September 14, 1949 in Glendale, California) is an American musician. He is best known as the guitarist for the psychedelic rock band Strawberry Alarm Clock and the Southern rock band Lynyrd Skynyrd.[1]

King was one of the founding members of Strawberry Alarm Clock, formed in Los Angeles in the mid-1960s. The band’s largest success was with a song that King co-wrote, “Incense and Peppermints” (but, along with keyboardist Mark Weitz, did not get credit). The song reached No. 1 on the Billboard Hot 100 in October 1967. Their follow-up single, “Tomorrow”, reached No. 23 in January 1968.

King met the members of Jacksonville, Florida-based Southern rock band Lynyrd Skynyrd when the band opened up forStrawberry Alarm Clock on a few shows in early 1968. It wasn’t until 1972 that he joined Skynyrd, replacing Leon Wilkeson on bass, who left the band briefly. Wilkeson rejoined the band, and King switched to guitar, creating the triple-guitar attack that became a signature sound for the band.

His guitar playing and songwriting skills were an essential element to the band’s first three albums: Pronounced Leh-Nerd Skin-Nerd, Second Helping and Nuthin’ Fancy. King co-wrote the Skynyrd hit song “Sweet Home Alabama” and it is his voice you can hear counting off the tune before launching into his famous Stratocaster riff. Other songs that King wrote or co-wrote the music for include “Poison Whiskey”, “Saturday Night Special“, “Mr. Banker”, “Swamp Music”, “Whiskey Rock-a-Roller”, “Railroad Song”, “I Need You”, and “Workin’ For MCA”.

King decided to leave the band in 1975 during the ‘Torture Tour’. He was replaced in 1976 by Steve Gaines, who was killed in a plane crash along with singer Ronnie Van Zant on October 20, 1977. Coincidentally, Gaines and King share the same birthdate.

King was one of the guitarists for the reunited Lynyrd Skynyrd in 1987, and played a major role in the reunited band. He was forced to leave Lynyrd Skynyrd again in 1996 due to congestive heart failure. He left on the understanding that he would rejoin once he regained his health, but the band did not allow him to rejoin.[citation needed]

King, along with all pre-crash members of Lynyrd Skynyrd, were inducted into the Rock and Roll Hall of Fame in 2006. He now lives in Nashville, TN and is “quite happily retired”.[citation needed]

In January 2012, Ed King underwent a successful heart transplant and in his words is “healing well”.[citation needed]

Finding The Right Notes of DAN OUELLETTE about RON CARTER