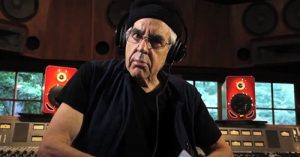 Elliot Mazer (September 6, 1941 – February 7, 2021[1]) was an American audio engineer and record producer best known for his work with Linda Ronstadt, Neil Young, Bob Dylan, The Band, and Janis Joplin.[2] In addition, he has worked on film and television projects for NBC and various independent studios, and taught at University of North Carolina at Asheville and Elon University.

Mazer served as a consultant to Stanford University’s Computer Center for Research in Music and Acoustics from 1976-1984. He designed the world’s first all-digital recording studio and co-invented “D-zap”, which was a device to detect possible shocking hazards in the studio. Mazer served as President of Artificial Intelligence Resources Inc. in the late 1980s. Here, he developed the AirCheck Monitoring system, which he then sold to Radio Computing Services (RCS). From 1989-2005 Mazer worked as Senior Vice President of New Business Development for RCS in New York.[3]