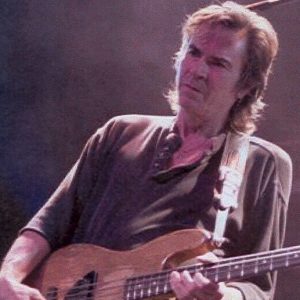 Erik Scott (born January 17, 1948 – October 11, 2019) was an American bass guitar player, producer, and songwriter. Scott played bass for the band Flo & Eddie in the 1970s as well as Alice Cooper in the early 1980s, for whom he also produced. In the 1990s he was one of the founding members of Sonia Dada, which reached the number one position on the Australian music charts with their debut album. Scott was also the co-writer of the song Father, Father, which was the title track for the Pops Staples‘ album of the same name, winner of the 1994 Grammy Award for Best Contemporary Blues Album. In 2008 he became a solo artist as well, with his debut album Other Planets. He has recorded four solo albums in total, including the 2016 ZMR Awards Album of the Year winner In the Company of Clouds.

Erik Scott played his first instrument in the fourth grade.[1] As a professional he was first recorded as a bass player on the albums of bands as far back as 1969[2] with the bands Food and Jambalaya. Then in 1974 he was the bass player on Flo & Eddie‘s comedy rock album Illegal, Immoral and Fattening as well as their 1976 follow-up album Moving Targets.[3] Scott also toured with the band from 1974 onwards.[2] According to Scott, it was Flo & Eddie that gave him his enduring industry nickname “Eski”.[4] In 1978 Scott became the bass player for Tonio K on his solo album Life in the Foodchain, and in 1980 on Franne Golde‘s final solo album, Restless.[3] In 1980, Scott was co-producer on Peter McIan’s album Playing Near the Edge, which was voted one of Cashbox‘s top ten albums of the year,[5] and teamed up with Carl Palmer and John Nitzinger in the group PM as bass player for their sole album.[6] They appeared on the German TV show Rockpop performing the single “Dynamite”.[7] Scott was a producer on Sharon O’Neill‘s 1981 album Maybe, which reached number 38 on the Australian music charts.[8] During this period Scott also wrote and recorded music for the television shows Starsky & Hutch, Charlie’s Angels, Vega$, and The Love Boat.[2]

Erik Scott on the Alice Cooper Special Forces tour in 1981

During this time he became an original member of the second band: Sonia Dada. Scott was a composer for and played bass on their debut album Sonia Dada, which reached the number one position on the ARIA charts, becoming the 13th highest selling album of 1993 in Australia.[11] The single You Don’t Treat Me No Good from the album lasted four weeks in the number one position on the Australian charts in 1992—replacing Whitney Houston‘s I Will Always Love You.[12] At the same time, Sonia Dada’s single You Aint Thinking (About Me) was also at number three on the Australian charts.[1]

Scott was also bass player and composer on their 1995 album A Day at the Beach. Scott was quoted as saying at the time that, “It’s a very natural connection between eight guys and that’s unnatural.”[13] In 1998 Scott composed, produced, and played bass on their third album, My Secret Life, and their 1999 live album Lay Down and Love It Live. That year Scott was interviewed about the sound of the group and said, “The best description I’ve heard that really makes sense to me is that it’s a collision of rock ‘n’ roll and R&B with a gospel seasoning.”[14] In 2002 Scott once again served as producer and played bass for their fourth album Barefootsoul, as well as for their 2004 album Test Pattern.[3]

In 2008 Scott released his solo debut Other Planets. John Diliberto reviewed the album as the Echoes radio program CD of the month for February 2009, stating that, “It’s an album that’s more Pink Floyd than Jaco Pastorius. Scott isn’t a frustrated electric guitarist. He’s a composer as much as a bass player who dives into the deep soul and nuances of the bass, extracting sensuous melodies and atmospheric moods.”[15] Bass Musician Magazine called it one of their favorite CDs of 2008.[16]

In April 2014 Scott released his sophomore solo album, And The Earth Bleeds. On the album he both plays the instrumentals and sings vocals on several of the tracks. Lorraine Devon Wilke of The Huffington Post wrote of the album that, “Scott has conjured up a new version of his own artistry in and the EARTH BLEEDS, one that, particularly after repeated plays, becomes mesmerizing and hypnotic… a ‘soulful and mystic brew.'”[18] Bass Musician Magazine said of the album that, “Erik has taken his enchanting and mystical music a step further with the release of ‘And The Earth Bleeds’.” Many of the songs on the album were inspired by Scott’s travels, especially his time spent in Scotland during 2013.[19] The album mixes worlds music, jazz, and other influences. Music Street Journal wrote that the album is “progressive music that defies definition”.[20]

In 2014 Scott released Spirits, a remix album featuring tracks from his first two solo albums. In December 2014 it ranked Number One on the Zone Music Reporter’s Top 100 Radio Airplay chart.[21] New Age Music Reviews said of the album that, “I think diversity is the key to success in area of employment and never is it more evident than with Scott’s music … Scott’s bass is quite prolific throughout this recording; his prominence and importance to the overall presentation reminded me of the dominance of a Jaco Pastorius or Tony Levin. It is like the purity of a hot springs bubbling essence and the synchronicity of time meeting for a grand explosion of colors and sounds. It’s both beauty and wonder put together in one tightly wrapped package.”[22]

In The Company of Clouds[edit]

Scott’s fourth solo album received the Album of the Year award and Best Contemporary Instrumental Album award from the 2016 ZMR Music Awards.[23] It was also number one on ZMR airplay at the end of that year.[24] Scott’s bass is featured on each track as the central instrument, often including his vocals as well. John Pirruccello plays accompaniment on his steel guitar on many tracks, and the album also features several other accompanying artists.[25] The album was inspired by Scott’s diagnosis and treatment for esophageal cancer, leading to remission, and the spiritual questions he wrestled with during this time. John Diliberto wrote of the work that Scott is “a bassist who takes leads, playing vocal melody lines that perfectly suit his fretless bass style … He brings the music into his melodic space, surrounding it with lush, but understated synthesizers and working under the canopy of Pirruccello’s pedal steel.”[26]

In 1979/1980 he provided bass guitar and vocals to Carl Palmer-led band PM on their, one and only, 1980 album 1:PM. Scott’s other work in the 1980s included recording as the bass player and a producer on the band Idle Tears’ self-titled 1986 album Idle Tears.[27] He was also the co-writer of the Ted Nugent song “When Your Body Talks” on his 1986 album Little Miss Dangerous.[28] In 1987 Scott was a songwriter for the Triumph record Surveillance, which reached gold record status in Canada. In 1989 Scott was composer and bass player on the Signal’s album Loud & Clear as well. As a bass player he recorded on Kim Carnes‘ 1993 compilation album Gypsy Honeymoon: The Best of Kim Carnes, and Pops Staples‘ 1994 album Father, Father, for which he co-wrote the title track. Father, Father won the 1994 Grammy Award for Best Contemporary Blues Album.[29] In 2004 Scott then played bass on Staples’ daughter Mavis Staples‘ album Have a Little Faith.[3]

In the film industry, Scott has provided music for the motion pictures Waterproof starring Burt Reynolds, Nothing to Lose, and National Lampoon’s Vacation as well as its sequels.[2]

Scott is married to his wife Janice Mickie Scott.