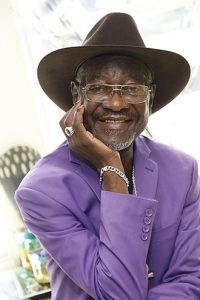 Frank Bey (January 17, 1946 – June 7, 2020) was an American blues singer.  He was the seventh of twelve children born to gospel singer Maggie Jordan. Although his birth name was Frank Bass, he changed his last name to Bey at age 27 when he joined the Moorish Science Temple of America.[1]

Born and raised in Millen, Georgia, Frank Bey began his singing career performing gospel at the age of four. Along with his brother and two cousins, their group “The Rising Sons” toured around The South making live appearances as well as radio broadcasts.[2] He remained with them until age 12 or 13 when the group dissolved.  He also sang with his mother at local concerts, where he had the opportunity to help open shows for luminaries such as the Five Blind Boys of Alabama, the Soul Stirrers, and more.[1]

Bey left home when he was 17 and moved to Philadelphia, where he worked for two and a half years as a driver for Gene Lawson, Otis Redding’s advance publicity man. Redding sometimes rode in the back seat on trips between engagements. On three of those occasions, when the opening act was late showing up, Bey says he was given the opportunity to open the shows. By the early 70’s he joined the Moorish Vanguard and relocated to Aiken, South Carolina.  In 1976, Bey produced “The Sunset of Your Love” on the Country Eastern Music label.[3] James Brown then published the song on Polydor Records without their permission. The group initially accused Bey of giving the song to Brown but Brown later settled and admitted to taking the song.[4] After this, Bey left the music business and wouldn’t sing again for 17 years.

By 1996, Bey returned to singing in the Philadelphia area.  In 1998, Bey’s debut album, Steppin’ Out, was released on MAG Records.[5] Health problems interfered with his ability to perform in support of the release, and he subsequently released “Blues in the Pocket” in 2007 on Jeffhouse Records.[6] By then, Bey was Brought by Blues DJ Noel Hayes to the Bay Area in California to perform with guitarist Anthony Paule and other area musicians. The two went on to release Three albums, “You Don’t Know Nothing (Live)”[7] in 2014 and “Soul for Your Blues, and 2015 “Not Goin’ Away””[8] later in 2013.[1]

In July 2018, Bey signed with Nola Blue Records.[9] In September, he released his first CD on the Nola Blue label, Back In Business[10]. This was followed by the release of All My Dues Are Paid[11] in January 2020.