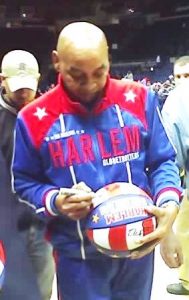 Fred “Curly” Neal (May 19, 1942 – March 26, 2020) was an American basketball player who played with the Harlem Globetrotters. Following in the footsteps of Marques Haynes, Neal became the Trotters’ featured ballhandler, a key role in the team’s exhibition act.

On January 11, 2008, the Globetrotters announced that Neal’s number 22 would be retired on February 15 in a special ceremony at Madison Square Garden as part of “Curly Neal Weekend.”[2] Neal was just the fifth Globetrotter in the team’s 82-year history to have his number retired, joining Wilt Chamberlain (13), Meadowlark Lemon (36), Marques Haynes (20) and Goose Tatum (50).[3] On January 31, 2008, it was announced that Neal would be inducted into the North Carolina Sports Hall of Fame.[4]

He was also granted the Harlem Globetrotters‘ prestigious “Legends” ring which is presented to those with major humanitarian contributions in the organization and this award was the second highest honor ever received by a former player. [5]

A mural commemorating Neal’s achievements both as a Globetrotter and during his time at Dudley High School is painted in the basketball gym of the Hayes-Taylor Memorial YMCA at 1101 East Market Street in Greensboro, North Carolina. He had two daughters, Rocurl (Raquel) and Laverne Neal, and six grandchildren, David, Dante, Jayden, Brandon, Deja and Hailey. Neal lived in Houston with his fiancé Linda Ware until his death.[6] On March 26, 2020, Neal died at his home outside Houston at the age of 77.[7]