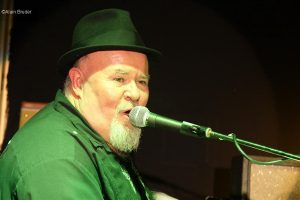 He began his musical training as a drummer at age eight[1] but two years later he had picked up both the guitar and his initial piano skills from boogie-woogie pianist-neighbours.[2][3] Around the age of 16 he began working with some of the big names in the West Coast blues scene including Big Joe Turner and T-Bone Walker. In the mid-seventies he joined the James Harman Band[2] and had a stint as pianist for boogie group Canned Heat between November 1974 and May 1976. From 1981 to 1984 he toured with The Blasters, and in 1986 finally recorded his first solo album, Handmade. His The Return of the Formerly Brothers, recorded with Amos Garrett and Doug Sahm in 1987, won a Juno Award the following year for Best Roots & Traditional Album.

From 1993 to 2007, Taylor played with The Fabulous Thunderbirds[4] amongst various other projects. He recorded an eponymous second solo album for Pacific Blues in 2003 partly accompanied by James Harman and Bill Bateman.[5] This album included a version of “Pinetop’s Boogie Woogie“.

Since 2007, he has been based in Belgium, playing and recording with Fried Bourbon,[6] CC Jerome’s Jet Setters, Dave Alvin and Jo’ Buddy. He toured as the Gene Taylor Trio, with drummer Nico Vanhove, and the guitarist Bart De Mulder. He played at the Brussels Boogie-Woogie Festival of 2012, which took place at the Théâtre St Michel on November 24.