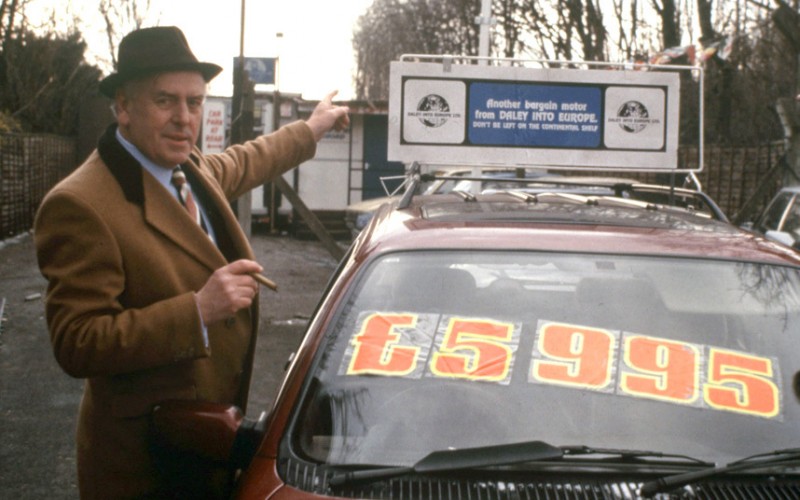 George Edward Cole, OBE (22 April 1925 – 5 August 2015) was an English actor whose career spanned more than 70 years. He was known for playing Arthur Daley in the long-running ITV drama show Minder and Flash Harry in the early St Trinian’s films.

Cole was born in Tooting, London.[1][2] He was given up for adoption at ten days old and adopted by George and Florence Cole, Tooting council employee and cleaner respectively. He attended secondary school in nearby Morden.[1]He left school at 14 to be a butcher’s boy, and had an ambition to join the Merchant Navy, but landed a part in a touring musical and chose acting as a career.

At age 15, Cole was cast in the film Cottage to Let (1941), opposite Scottish actor Alastair Sim. Sim liked Cole, and agreed with his family to take in Cole and his adoptive mother to their home. Acting as his mentor, Sim helped Cole lose his Cockney accent; Cole stayed with the Sim family until he was 27.[3] He later attributed his career success to Sim, with whom he appeared in a total of 11 films, ending with a television film of The Anatomist (1956). Cole also acted opposite Laurence Olivier in The Demi-Paradise (1943) and Olivier’s film version of Henry V (1944), of which he was the last surviving cast member. His career was interrupted by hisNational service in the Royal Air Force from 1944 to 1947, where he was temporarily a radio operator.

Returning to his acting career, he became familiar to audiences in British comedy films in the 1950s. Cole appeared with Alastair Sim in Scrooge (as the young Scrooge) in 1951, but his best known film role was as “Flash Harry” in the St Trinian’s films (two of which also star Sim), and in the comedy Too Many Crooks (1959). He also starred in the film Take Me High (1973) alongside Cliff Richard and Deborah Watling. He was known for his lead role in the radio comedy A Life of Bliss (1953–69) in which he played an amiable but bumbling bachelor, David Alexander Bliss.[4] (David Tomlinson initially played Bliss). It lasted for six series and 118 episodes, becoming a TV series in 1960. In this form, it ran for two series, but no episode is known to survive.[5]

The Scarecrow of Romney Marsh (1963) was produced as a three-part television film in colour by Walt Disney. It was shot on location in England and was directed byJames Neilson. It starred Patrick McGoohan in the title role, with Cole as Mipps.

Cole appeared as a guest star in the Gerry Anderson produced television series UFO in the episode “Flight Path” (1971). He also made a guest appearance as Mr Downs, a bank manager, in a 1978 episode of the sitcom The Good Life, performed in the presence of the Queen.

His best remembered television role was as the crooked used-car dealer Arthur Daley in the Thames Television series Minder, which he played from 1979 to the show’s conclusion in 1994. Prior to this, he had played a struggling writer in the BBC sitcom Don’t Forget To Write! (1977–79). He also played Sir Giles Lynchwood in the BBC’s adaptation of the Tom Sharpe novel Blott on the Landscape (1985). Cole starred in a number of comedies, such as Comrade Dad (1984–86), Dad (1997–98) and My Good Friend (1995–96).

Cole was cast in the crime-horror film Road Rage as Cyril; it awaits release.[6]

He was invested as an Officer of the Order of the British Empire in 1992.[8] He resided for over 70 years in Stoke Row, Oxfordshire.[9] His autobiography, The World Was My Lobster, was published in 2013.[7]