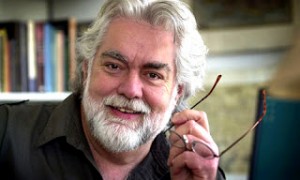 Hansen was born in Reykjavík, Iceland, and moved to the United States when he was five. He lived in Maine until age eleven, when his family moved to Texas, where he attended both Austin High School and the University of Texas at Austin. He majored in English and mathematics as an undergraduate, and then went to graduate school in Scandinavian Studies and English.

His first job out of high school was as a computer operator, before he began theater work during college. He was also a football player during high school, and for a while a bar bouncer. In 1973, just after finishing graduate school, Hansen heard that The Texas Chain Saw Massacre was being filmed in Austin and decided to try out. He got the part of Leatherface, the masked killer in the movie. Hansen apparently visited and studied children with special needs to determine mannerisms for Leatherface.

After the success of the movie, Hansen co-starred in Demon Lover, but after the experience he decided not to continue acting, instead pursuing a writing career. In 1975, after one extra year of graduate school, Hansen moved back to Maine and started writing. During this time he rejected a part he was offered in the cult horror film The Hills Have Eyes.

After writing (and occasionally editing) for magazines and writing books, Hansen returned to acting in 1988, appearing in the horror spoof Hollywood Chainsaw Hookers, and has appeared in 20 films since. He considers his recent acting as a side project and has continued to write books. He has also written film scripts, and writes and directs documentary films.

Hansen is also an author; his nonfiction travel memoir, Islands at the Edge of Time, A journey to America’s Barrier Islands, was published in 1993. In 2013 he wrote the nonfiction book Chain Saw Confidential, which focuses on the making and reception for The Texas Chain Saw Massacre. In addition, he has taught college as an adjunct instructor.