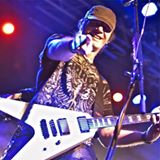 Hey Herman, Check out my review of the Devil Rides Out on XS ROCK! http://xsrock.com/herman-frank-devil-rides/

The new studio album by legendary Germany metal guitarist HERMAN FRANK and his band will be unleashed on November 18.
Check out this brand new “The Devil Rides Out” EPK, which (beside a few new sound snippets) gives you plenty of info on the band’s new line-up, working as a team and future plans.
#hermanfrank #thedevilridesout #germanmetal #teutonic