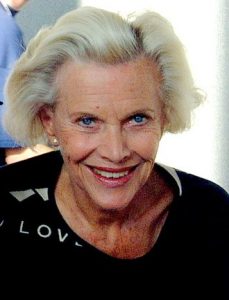 Blackman was born in Plaistow. Her father, Frederick Blackman,[4] was a civil service statistician.[5] She attended North Ealing Primary School and Ealing County Grammar School for Girls.[6] For her 15th birthday, her parents gave her acting lessons and she started training at the Guildhall School of Music and Drama in 1940. While attending the Guildhall School, Blackman worked as a clerical assistant for the Home Office. Following graduation, she was an understudy in the West End play The Guinea Pig.[7] In 1947 she appeared in the Patrick Hastings play The Blind Goddess at the Apollo Theatre.[8]

Blackman’s film debut was a nonspeaking part in Fame Is the Spur (1947). Other films include Quartet (1948), based on short stories by W. Somerset Maugham; So Long at the Fair (1950), in which she appeared with Dirk Bogarde; A Night to Remember (1958), an account of the Titanic disaster; the comedy The Square Peg (1958); Life at the Top (1965) with Laurence Harvey; The Virgin and the Gypsy (1970), and the Western films Shalako (1968) with Sean Connery and Brigitte Bardot and Something Big (1971) with Dean Martin.

Honor Blackman in Jason and the Argonauts

She played Hera in Jason and the Argonauts (1963), which is well known for the stop-motion animation and effects of Ray Harryhausen. She had roles in the films Bridget Jones’s Diary (2001) and Jack Brown and the Curse of the Crown (also 2001).[citation needed]

Albert R. Broccoli said Blackman was cast opposite Sean Connery in the James Bond films based on her success in the British television series The Avengers. He knew that most American audiences would not have seen the programme. Broccoli said, “The Brits would love her because they knew her as Mrs. Gale, the Yanks would like her because she was so good, it was a perfect combination”.[9]

During the 1960s, Blackman practised judo at the famous Budokwai dojo. This helped her prepare for her roles as Cathy Gale in The Avengers and Pussy Galore in Goldfinger.[10] At 38, she was one of the oldest actresses to play a Bond girl, five years older than Sean Connery.[11]

In 1968 Blackman appeared opposite John Neville and Hylda Baker in the musical play Mr & Mrs, based on the plays of Noël Coward.[12] In the late 1970s she toured Australia and New Zealand with Michael Craig and Colleen Clifford in the comedy play Move Over, Mrs Markham. In February 1979, she starred in Stephen Barry‘s production of Tom Stoppard‘s Night and Day at the Perth Playhouse, coinciding with Stoppard’s presence as a participant in the Festival of Perth.[13]

In 1981, she appeared in the London revival of The Sound of Music opposite Petula Clark. The production opened to rave reviews and the largest advance sale in British theatre history to that time. She spent most of 1987 at the Fortune Theatre starring as the Mother Superior in the West End production of Nunsense.

Blackman returned to the theatre in 2005, touring through 2006 with a production of My Fair Lady, in which she played Mrs. Higgins. She developed a one-woman show, Word of Honor, which premiered in October 2006. In April 2007, Blackman took over the role of Fraulein Schneider in Cabaret at the Lyric Theatre in London’s West End. She left the show at the end of September 2007.[14]

Blackman started acting on television in the recurring role of “Nicole”, secretary/assistant to Dan Dailey‘s character of Tim Collier on the 1959 television series The Four Just Men. In a 1962 episode of The Saint titled “The Arrow of God”, Blackman played an adulterous personal secretary named Pauline Stone, who became one of several suspects in the murder of a despised gossip columnist.

In an episode of The Avengers, “Too Many Christmas Trees” (1965), John Steed received a Christmas card from Cathy Gale. Reading the envelope, he says in a puzzled voice, “Whatever can she be doing at Fort Knox…?” It was an inside joke, as Blackman was filming Goldfinger at the time.[15]

In December 1969 and in February 1993 Blackman was taken by surprise as the subject of This Is Your Life. In 1972, Blackman (as a “Special Guest Star”) and Richard Basehart played a married pair of Shakespearean actors who commit murder in the American crime mystery series Columbo (episode “Dagger of the Mind“). In 1983, she appeared in a film production of Agatha Christie‘s novel, The Secret Adversary, in the role of Rita Vandemeyer,[16] and as Juno/Empress Eugenie in the BBC television production of Orpheus in the Underworld.[17]

In 1986, she had a role in “Terror of the Vervoids“, a segment of the Doctor Who serial The Trial of a Time Lord. From 1990 to 1996, she appeared as Laura West on The Upper Hand. In 2003, Blackman took a guest role on Midsomer Murders, as ex-racing driver Isobel Hewitt in the episode “A Talent for Life”. In September 2004, she briefly joined the Coronation Street cast in a storyline about wife swapping. In 2007, she participated in the BBC TV project, The Verdict. She was one of 12 well-known figures who made up a jury to hear a fictional rape case. The series was designed to explore the jury system. She was sworn in as a juror as “Honor Kaufmann”. In 2013, she guest-starred in the BBC medical drama Casualty and in By Any Means.

Blackman also appeared in a number of episodes of Never the Twain with Donald Sinden and Windsor Davies as vet Veronica Barton.

Blackman’s recording with The Avengers co-star Patrick Macnee of “Kinky Boots” (1964), referring to the boots she wore in the show, was a surprise hit. In 1990 it resurfaced on the chart, peaking at No. 5 after being played incessantly by BBC Radio 1 breakfast show presenter Simon Mayo. After her appearance in Goldfinger, she recorded a full album of songs titled Everything I’ve Got.[18]

In 1968 Blackman released a 45 of “Before Today”/”I’ll Always Be Loving You” (CBS 3896), which were featured in the musical play Mr & Mrs. In 1983 she sang as Juno in a special TV production of Jacques Offenbach’s Orpheus in the Underworld.

On 6 July 2009, Blackman released a new single, “The Star Who Fell from Grace”, composed by Jeff Chegwin and Adrian Munsey.[19] She also compered the James Bond Prom, part of the “Welsh Proms” concert series in 2009.[20]

Blackman appeared in the Doctor Who audio drama The Children of Seth, in which she plays the role of Anahita, released in December 2011.[21]

Since her divorce from Kaufmann, she has not remarried and has stated that she prefers being single. She enjoys watching football.[22]

Blackman is a member of the Liberal Democrats and was previously a member of the Liberal Party, campaigning for the party in the 1964 general election.[24] She declined a CBE in 2002, as she felt it would be hypocritical to accept the award as a republican.[25] She has publicly supported changing the British electoral system from first-past-the-post to alternative vote for electing members to the House of Commons in the Alternative Vote referendum in 2011.[26]

In 2012 Blackman publicly criticised actor Sean Connery, her Bond co-star in the 1960s, for his status as a tax exile. She said,

“I disapprove of him strongly now. Because I don’t think you should accept a title from a country and then pay absolutely no tax towards it. He wants it both ways. I don’t think his principles are very high.”[27]

Following the death of Margaret Thatcher in April 2013, when asked about her thoughts on Thatcher, Blackman responded:

“She’s not my idea of Heaven I have to say. Although she did some good things in her time, she was merciless about the unions. I’m not too happy about the Falklands either. We lost men, we took injuries and we blew up a ship. I suppose we need it for a base, but my common sense tells me that it does belong more to Argentina than it does to us. Lots of people may throw things at me for saying that about Thatcher, but hopefully not during the performance. She was a powerful figure, but she did damn all for empowering women. She didn’t surround herself with any women whatsoever or encourage women to come into politics or do anything in particular. She could have been a quite wonderful role model.”[28]