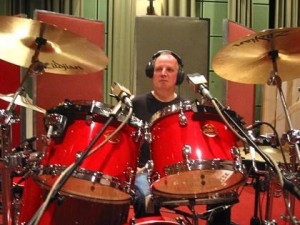 Copley is a master of the Open-handed drumming technique. The method is without crossing the hands when playing the hi-hat (or ride-cymbal) and snare drum simultaneously as opposed to the more traditional way of playing drums which features crossed hands as the basic playing position. This allows players such as Copley to play more freely and also to incorporate more melodic motifs to songs.

Copley has been a long time Tama drums endorser. He has used Superstar, Granstar, Artstar II and Starclassic drums throughout the years.[3] Another long time association is with Zildjian Cymbals. Copley also uses Vic Firth drumsticks.[4]