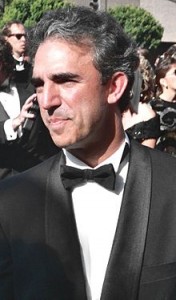 Jon Thomas Terrell[1] (July 12, 1948 – August 24, 2017), professionally known as Jay Thomas, was an American actor, comedian, and radio talk show host. His notable television work included his co-starring role as Remo DaVinci on Mork & Mindy (1979–81), the recurring role of Eddie LeBec on Cheers (1987–89), the lead character Jack Stein on Love & War (1992–95), and a repeat guest role as Jerry Gold on Murphy Brown. He won the Primetime Emmy Award for Outstanding Guest Actor in a Comedy Series in 1990 and 1991 for portraying Gold.

In 1997, he starred in the television film Killing Mr. Griffin, based on the novel of the same name. In film, he co-starred in Mr Holland’s Opus and portrayed The Easter Bunny in The Santa Clause 2 and The Santa Clause 3. He was also an annual guest on The Late Show with David Lettermanduring the Christmas season, where he told a story about how he met Clayton Moore, who portrayed the self-titled character on The Lone Ranger.[2] Beginning in 2005, he hosted The Jay Thomas Show on SiriusXM Satellite Radio, and was on every Friday afternoon on Howard 101.[3]

Thomas made his annual Christmastime appearance with David Letterman for the first time in December 1998. Letterman and one of his other guests that evening, then-New York Jets quarterback Vinny Testaverde, took turns tossing footballs at the Christmas tree across the stage, atop which sat a large meatball. As the two tried to knock off the meatball and failed repeatedly, Thomas came out and decided to join in the festivities and knocked the meatball off of the tree.[citation needed]

When Letterman talked with Thomas later on, he told a story about when he was a young disc jockey at a radio station in Charlotte, North Carolina. Thomas had been making a promotional appearance at a local car dealership. This dealership had also booked Clayton Moore to make an appearance, dressed in his Lone Ranger costume.[8]

As the story goes, after the appearance Thomas, who at the time sported what he referred to as a “white man’s Afro“, and his friend, who was wearing high heeled shoes, tight pants, and a tiedyed shirt, went off to get “herbed up” (smoke marijuana) behind a dumpster, after the broadcast ended. When they returned to pack up their equipment, they discovered that Moore was still there, as the car that was supposed to drive him to the Red Roof Inn never arrived. Thomas offered Moore a ride in his old Volvo and he accepted. As they were sitting in traffic, an impatient middle-aged man driving a Buick, backed into the front end of Thomas’ car, broke a headlight and drove away.

Thomas gave chase to the Buick through heavy traffic, finally caught up to the man and confronted him about the damage. The indignant driver denied breaking the headlight and Thomas threatened to call the police. The man said nobody would believe their story because Thomas and his friend looked like “two hippy freaks”. At that moment, Thomas said that Moore, who was still in costume as the Lone Ranger, got out of the car and said to the man, “They’ll believe me, citizen!” [9]

For every year thereafter, with the exception of 2013, Thomas appeared to re-tell the Lone Ranger story and once again attempt what Letterman calls the “Late Show Quarterback Challenge”. For the final appearance of the story in 2014, Thomas was again successful in knocking the meatball off the top of the tree. Thomas missed the 2013 Late Show Christmas episode due to surgery on his throat; John McEnroe took his place and told the Lone Ranger story, then tried to knock the meatball off the tree by hitting tennis balls at it but failed.[8]

Thomas fathered J. T. Harding in an out-of-wedlock relationship and the child was adopted by another family in Michigan. Thomas and his son spoke about their reunion on the Dr. Phil Show. Harding was the lead singer of the band JTX,[10] and is also a country music songwriter.