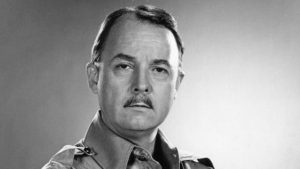 John Benedict Hillerman (December 20, 1932 – November 9, 2017) was an American actor best known for his starring role as Jonathan Quayle Higgins III on the television show Magnum, P.I. that aired from 1980 to 1988. For his role as Higgins, Hillerman earned five Golden Globenominations, winning in 1981, and four Emmy nominations, winning in 1987. He retired from acting in 1999.

Hillerman was born in Denison, Texas, the son of Christopher Benedict Hillerman, a gas station owner, and Lenora Joan (née Medlinger).[1] He was the middle child with two sisters.[2] His father was the grandson of immigrants from Germany and France,[3] and his mother the daughter of immigrants from Austria and Germany.[3] He developed an interest in opera at the age of ten, and traveled to Dallas to watch Metropolitan Operaproductions.[4] Hillerman attended St. Xavier’s Academy,[4] and after graduation, he attended the University of Texas at Austin for three years, majoring in Journalism.[5]

Hillerman served four years in the United States Air Force (1953-1957), working in maintenance in a B-36 wing of the Strategic Air Command, and achieving the rank of sergeant.[4][6] He became interested in acting after working with a theatrical group in Fort Worth during his service: “I was bored with barracks life. I got into [acting] to meet people in town. A light went on.”[4] After his 1957 discharge, he moved to New York City, to study at the American Theatre Wing, and performed in professional theater for the next twelve years, in productions such as Henry IV, Part 2and The Great God Brown.[7] Despite starring in over 100 lead roles,[4] Hillerman was unable to make a living as a stage actor, and he moved to Hollywood in 1969.[4][6]

Hillerman made his film debut in They Call Me Mister Tibbs! (1970) in an uncredited role as a reporter.[8] Director Peter Bogdanovich, with whom Hillerman had previously worked during his stage career, cast Hillerman in his films The Last Picture Show, What’s Up, Doc?, and Paper Moon.[4] In 1974, he played the memorable role of Russ Yelburton, the deputy chief of the Los Angeles Water Department in the film classic, Chinatown. Hillerman worked steadily thereafter in motion pictures and television in the 1970s, but after being cast in Magnum, P.I., he shot only four additional pictures between 1980 and 1996, with his final film performance coming in A Very Brady Sequel. 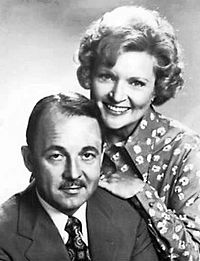 In 1975, Hillerman was a co-star in Ellery Queen as Simon Brimmer, a radio detective who hosted a radio show and tried to outsmart the title character (Jim Hutton).[9]:305 From 1976 to 1980, he had a recurring role as Mr. Conners on the sitcom One Day at a Time, and he co-starred as Betty White‘s estranged husband on The Betty White Show (1977-1978).[9] He is perhaps best remembered for his role as former British Army Sergeant Major Jonathan Higgins in Magnum, P.I. (1980–1988),[9]:642 for which he learned an English accent by listening to a recording of Laurence Olivier reciting Hamlet.[10][note 1] He considered Higgins his favorite role,[11] and described the character in a 1988 interview as “think[ing] he’s the only sane character [in the show], and everyone else is stark raving mad.”[4]

In 1982, Hillerman starred in the television pilot of Tales of the Gold Monkey, as a German villain named Fritz the Monocle.[12] He hosted the 1984 David Hemmings-directed puzzle video Money Hunt: The Mystery of the Missing Link.[13] In 1990, Hillerman returned to television to perform for one season as Lloyd Hogan in the sitcom The Hogan Family.[9]:465 That same year, he portrayed Dr. Watson to Edward Woodward‘s Sherlock Holmes in Hands of a Murderer.[12]

In 1993, he appeared in Berlin Break for one season.[10] He played the role of Mac MacKenzie, a former spy and currently the proprietor of Mac’s, a bar in West Berlin considered to be neutral territory during the Cold War.[9] Mac teamed up with two jobless spies as investigators: Valentin Renko (Nicholas Clay), an ex-KGB agent, and Willy Richter (Kai Wulff), an ex-BND (West German secret service) operative.[6] The show reunited him with Jeff MacKay, who portrayed “Mac” MacReynolds in Magnum P.I..[14]