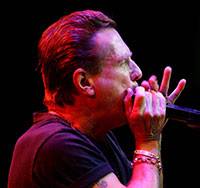 John “Juke” Logan (born 1954)[1] is an American electric blues harmonica player, singer, pianist and songwriter. He is best known for his harmonica playing on the theme music for television programs (Home Improvement and Roseanne) and films (Crossroads and La Bamba). In addition to playing on many other musicians’ work, Logan has released four solo albums, and written songs for Poco, John Mayall and Gary Primich.[1]

John Farrell Logan was born in Los Angeles, California, United States.[1] He gained his nickname, following his constant playing of Little Walter‘s track, “Juke“.[2] He originally learned to play the piano, and instigated his own groups the Angel City Rhythm Band, which was later known as the Juke Rhythm Band.[3]

His early career saw Logan work as a backing musician for Dobie Gray, Leon Russell and by the latter half of the 1980s, Dave Alvin. In addition, Logan’s songwriting credits include John Mayall’s “Fanning the Flames”, Poco’s “Starin’ At The Sky” (co-penned with Timothy B. Schmit), plus Gary Primich’s “The Sound of Money Talkin'” and “Hustler”. In 1984, he worked with Ry Cooder on the soundtrack for the film,Streets of Fire.[1] His own debut album, The Chill, was released in 1995, and after moving to his own Mocombo Records,[3] followed this with Juke Rhythm (1999), the live album, Live as It Gets (1999), and his most recent offering, The Truth Will Rock You (2005).[1] Until 2000, Logan co-hosted a Los Angeles based weekly radio program, The Friday Night Blues Revue, with Ellen Bloom.[2]

In 2009, Logan was diagnosed with esophageal cancer and underwent successful surgery.[5]

In 2010, in conjunction with Rick Holmstrom and Stephen Hodges, Logan appeared on the album, Twist-O-Lettz. [6] In September 2011, Logan made a club appearance in Tucson, Arizona.[5]