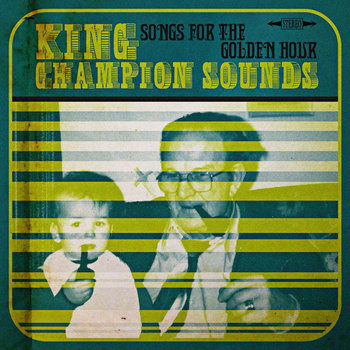 What if The Fall had garnished their rockabilly grooves with swing-era horns? What if Can played Ghanaian highlife? What if Morricone had scored spaghetti westerns in a Moroccan souk? King Champion Sounds recombine canonical influences in new contexts.! (SUNDAY TIMES / Stewart Lee December 2013)
Video of Ghetto of Eden https://www.youtube.com/watch?v=18gq1vJN1W4

King Champion Sounds are an English/Dutch band and the brainchild of Ajay Saggar (Dandelion Adventure, Donkey, The Bent Moustache).! Vocals and lyrics are taken care of by G.W. Sok (The Ex). The seven piece line-up is completed by a stellar second guitar player, bass and drums (a rhythm section that Mark E. Smith would be proud of), and two horn players.

The result is “a mix of The Fall, Can, Sun Ra, Captain Beefheart, Public Image Ltd, King Tubby. I love this band”, says Sonic Youth’s Thurston Moore. The band started early 2013, for a one-off support in Amsterdam with, and at the request, of Mike Watt (Minutemen, fIREHOSE, Stooges).

King Champion Sounds are fantastic. They have real presence and authority, they have an astonishing sound (a mix of shuddering, rumbling Fall bass lines, clattering guitar patterns and this soothing, affirming soul revue / Dexys feel from the horns), and they have thesongs. They sound massive live. (INCENDIARY October 2013)

King Champion Sounds deliver their second blistering, limited 10” album with free CD inside that combines hypnotic krautedelic / dub / minimalist / electronica tunes with a sugarshit sharp wordsmith in his element. G.W.Sok (former lyricist / singer for The Ex) has never been in better form. The band, led by Ajay Saggar, close ranks hard to deliver the tightest and most exciting palette of music you will hear all year.