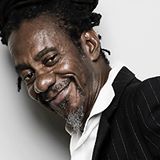 Luiz Carlos dos Santos (January 7, 1951 – August 4, 2017), more commonly known as Luiz Melodia, was a Brazilian actor, singer and songwriter of MPB, rock, blues, soul and samba. Son of samba artist and songwriter Oswaldo Melodia (from whom he inherited his stage name), he grew up in the slum district of São Carlos, in the neighbourhood of Estácio, often referred to as the “Cradle of Samba”. Since 1977, he has been married to singer, songwriter and producer Jane Reis and is the father of rap artist Mahal Reis (1980). His first LP, Pérola Negra, was released in 1973. He reached the finals of the Festival Abertura musical competition, hosted by Rede Globo, with his track “Ébano”.

Over the last few decades, Melodia released a number of albums and performed extensively in Brazil and Europe. In 1987, he played in Châteauvallon, France, and in Bern, Switzerland. In 1992, he performed at the III Folcalquier Music Festival, in France, and, in 2004, at the Montreux Jazz Festival, on the banks of Lake Geneva, where he appeared at the Stravinsky Auditorium, the festival’s main stage. He has performed in a number of European countries, including Germany, the UK, Denmark, France, Switzerland and Portugal. He played on the fourth solo album by Titãs member Sérgio Britto, released in September 2011 (Purabossanova).

In 2015, he won the 26th Brazilian Music Award for Best MPB Artist.

Luiz Carlos dos Santos, Luiz Melodia, was born in the region of Estácio, Rio de Janeiro, on 7 January 1951. The only son born to Oswaldo and Eurídice, he first discovered music through his father, who always played at home: “I would play his viola, trying out a few chords and always observing. He never let me touch the 4-string viola, which was a real relic, very beautiful. That was where I learned to play.”

Despite his musical affinity from a young age, Luiz ended up having to go against his father’s wishes, who dreamed of seeing him graduate: “He never supported me, he never helped at all, even when things began to happen for me. Later on, he became a huge fan. When he passed away, I lost a huge fan”, he revealed.

He initiated his music career in 1963 alongside vocalist Mizinho, while working as a printer, salesperson, clerk and musician in nightclubs. In 1964, he formed the band ‘Os Instantâneos’, alongside Manoel, Nazzareno and Mizinho. After abandoning his schooling, Melodia spent his teenage years songwriting and playing hits from the contemporary MPB and Bossa Nova scene, with the band Os Instantâneos, formed with a few friends. This experience, coupled with the atmosphere in which he lived – traditional samba from the slums of Rio de Janeiro – resulted in a blend of influences that developed into a unique style for Luiz Melodia. He was soon noticed by frequent visitors to the Estácio slums, poet Waly Salomão and Torquato Neto. Thanks to Wally, Gal Costa ended up meeting one of her favourite songwriters in Melodia, resulting in Gal Costa recording the track “Pérola Negra” from the album Gal A Todo Vapor, released in 1972. A little later, Maria Bethânia recorded her own version of “Estácio, Holly Estácio”.

It was at this time that the artist adopted his stage name ‘Luiz Melodia’ – taking the stage name used by his father Oswaldo -, and, the following year (1973), he released his first and anthological album Pérola Negra. His attitude, however, maintained the same irreverence and restlessness of the boy from the cradle of Rio de Janeiro’s samba scene, attributing him with a unique musical style, while also earning him fame as one of the “damned” artists among critics, alongside names like Fagner and João Bosco, for example. “We weren’t people that simply obeyed. You could say that we sidestepped all the house rules, the recording studio; we simply broke away from situations that weren’t convenient. I have always believed in what I do”, stated Luiz.

His career was officially established with his following album, Maravilhas Contemporâneas (1976), made popular thanks to the track “Mico de Circo” (1978), recorded upon his return to Rio.

Over the following decades, Melodia released a number of albums and performed extensively, including abroad. In 1987, he performed in Châteauvallon, in France, and in Bern, Switzerland, as well as at the III Folcalquier Music Festival, in 1992, in France. In 2004, he was invited to play the Montreux Jazz Festival, on the banks of Lake Geneva, where he appeared at Stravinsky Auditorium, the festival’s main stage. He has performed in a number of European countries, including Germany, the UK, Denmark, France, Switzerland and Portugal. Already widely known and having carved out a place for himself on the MPB ( Brazilian Popular Music) scene, Luiz Melodia released “Nós” in 1980, featuring the song “Codinome Beija-Flor”. His following album, Relíquias (1985), offered a reinterpretation of past hits with new arrangements such as “Ébano” and “Subanormal”. His very intimate recording Acústico – Ao Vivo (1999), in which Melodia once again touched on his past works, offered the spontaneity of a live recording, was considered a major success by fans and critics alike.

In 1972, his song “Pérola Negra” was recorded by Gal Costa on the album Gal A Todo Vapor, with the aid of poet-songwriters Torquato Neto and Wally Salomão, who first heard the song in the vicinities of Estácio, in Rio de Janeiro, where the songwriter lived. The same year, Maria Bethânia recorded a version of the track “Estácio, Holly Estácio”. The following year, in 1973, he released his first LP, Pérola Negra, featuring very popular tracks such as “Magrelinha”, “Estácio, Holly Estácio”, “Vale Quanto Pesa” and “Farrapo Humano”, among others. Two years later, in 1975, he was a finalist in the TV Globo competition Festival Abertura with his song “Ébano”. In 1976, his song “Juventude Transviada” was featured on the soundtrack to the novela “Pecado Capital” (Rede Globo) and on his LP Maravilhas Contemporâneas. Still in the 1970s, when his fame increased, he took part in an effort called Projeto Pixinguinha, sharing the stage with Zezé Motta. In 1978, he recorded the album Mico de Circo.

In the 1980s, he released the albums Nós (1980), Felino (1983), Claro (1985) and Pintando O Sete (1989). The latter included one of his greatest hits, Codinome Beija-Flor (Cazuza, Ezequiel Neves and Reinaldo Arias). In 1991, he recorded Codinome Beija-Flor featured on the soundtrack to “O Dono Do Mundo”, a tele-novela by TV Globo. 1995 saw the release of Relíquias, while Melodia also featured as a guest on the CD Guitarra Brasileira, by Renato Piau, on which he performed “Me Beija”, together with Piau and Tureko. The album also included his track “Fadas”. In 1997, he released the album 14 Quilates. A year later, in 1998, he participated on the tribute album Balaio do Sampaio, by Sérgio Sampaio, produced by Sergio Natureza, performing the track “Cruel” (Sérgio Sampaio). In 1999, he launched Luiz Melodia: Acústico, Ao Vivo, recorded at Teatro Rival (RJ), and featuring Renato Piau (steel and nylon string guitar) and Perinho Santana (nylon string guitar and electric guitar). He also performed songs by other songwriters, like Zé Kéti and Hotência Rocha, on the track “Diz Que Fui Por Aí”.

In 2008, Melodia cultivated an idea involving a samba project. Previously, in mid-2006, the artist had been invited to present a special performance in celebration of the 70th anniversary of Teatro Rival, in Rio de Janeiro. The focal point was samba songs from different periods, and, to some extent, the show formed the foundation that would become the album Estação Melodia, with a repertoire based on the CD, DVD and special MTV show.

In 2011, he played on fourth solo album by Titãs band member Sérgio Britto, released in September of that year (Purabossanova). In 2013, he performed at Teatro Rival (RJ). In the same year, a box set was released called Três Tons De Luiz Melodia, featuring three albums recorded by Melodia from three different decades: Pérola Negra, from 1973, Felino, from 1983, and Pintando O Sete, from 1991. In 2014, at a Teatro Rival BR gig, in Rio de Janeiro, he released the CD Zerima, his 14th solo album (recorded at Som Livre studios). Zerima Zerima is the 13th studio album by singer and songwriter Luiz Melodia, released in 2014 by Som Livre. Following a 13-year span without releasing new material, Luiz Melodia returned to his typical musical genre: samba and bossa nova, stemming from the 14 new tracks, is as personal and intimate as his exceptional vocal ability. Exuberating class and his trademark rhythm, Melodia presents new compositions like “Cheia De Graça” (Luiz Melodia), adding the amorous tonic that permeates the album and the deep-felt pain of love, expressed vividly in “Dor De Carnaval” (Luiz Melodia), which includes the special guest of São Paulo, acclaimed singer and songwriter Céu.

Luiz Melodia died on 4 August 2017 at the age of 66 in his hometown, Rio de Janeiro. He was fighting against a bone marrow cancer.[1]

In 2015, he was awarded the Música Popular Brasileira Award in the MPB category for ‘MPB – Best Singer’ for the album Zerima. During the same year, he toured the Zerima album, performing in Belo Horizonte, Porto Alegre, São Paulo and Rio de Janeiro, which included a performance at the historic music venue Circo Voador, in Lapa, in the city’s bohemian district.