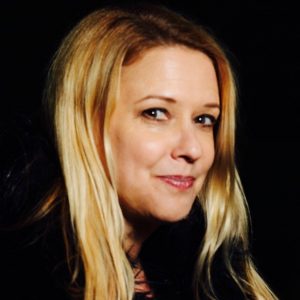 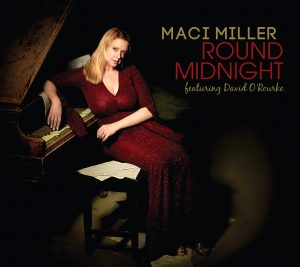 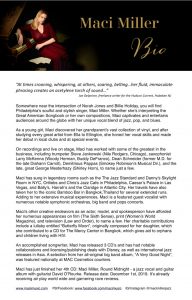 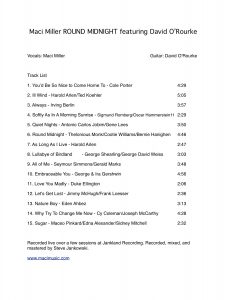 “At %mes crooning, whispering, at others, soaring, bel%ng…her ﬂuid, immaculate phrasing creates an acetylene torch of sound…” Joe Delpriore, freelance writer for the Hudson Current, Hoboken NJ
Somewhere near the intersection of Norah Jones and Billie Holiday, you will ﬁnd Philadelphia’s soulful and stylish singer, Maci Miller. Whether she’s interpreting the Great American Songbook or her own compositions, Maci captivates and entertains audiences around the globe with her unique vocal blend of jazz, pop, and blues. As a young girl, Maci discovered her grandparent’s vast collection of vinyl, and after studying every great artist from Ella to Ellington, she honed her vocal skills and made her debut in local clubs and at special events. On recordings and live on stage, Maci has worked with some of the greatest in the business, including trumpeter Steve Jankowski (Nile Rodgers, Chicago), saxophonist Larry McKenna (Woody Herman, Buddy DeFranco), Dean Schneider (former M.D. for the late Diahann Carroll), Demitrious Pappas (Smokey Robinson’s Musical Dir.), and the late, great George Mesterhazy (Shirley Horn), to name just a few. Maci has sung in legendary rooms such as the The Jazz Standard and Danny’s Skylight Room in NYC, Ortliebs and Chris’s Jazz Cafe in Philadelphia, Caesar’s Palace in Las Vegas, and Bally’s, Harrah’s and the Claridge in Atlantic City. Her travels have also taken her to the iconic Bamboo Bar in Bangkok,Thailand for several extended runs. Adding to her extensive musical experiences, Maci is a featured guest vocalist with numerous notable symphonic orchestras, big band and pops concerts, and cruise ships. Maci’s other creative endeavors as an actor, model, and spokesperson have afforded her numerous appearances on ﬁlm (The Sixth Sense), print (Women’s World Magazine), and television (Law and Order), to name a few. Her charitable contributions include a lullaby entitled “Butterﬂy Moon”, originally composed for her daughter, which she contributed to a CD for The Mercy Center in Bangkok, which gives aid to orphans and children living with HIV. An accomplished songwriter, Maci has released 3 CD’s and has had notable collaborations and licensing/publishing deals with Disney, as well as international jazz releases in Asia. A selection from her all-original big band album, “A Very Good Night”, was featured nationally at MAC Cosmetics counters. Maci has just ﬁnished her 4th CD: Maci Miller, Round Midnight – a jazz vocal and guitar album with guitarist David O’Rourke. Release date: December 1st, 2019.