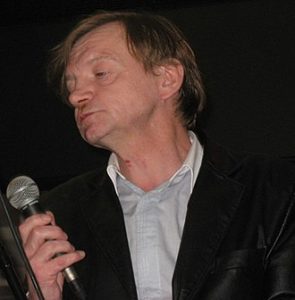 my favorite group for a long long time

Mark Edward Smith (5 March 1957 – 24 January 2018) was an English singer, songwriter and musician. He was the lead singer, lyricist and only constant member of the post-punk group the Fall.

Smith formed the Fall in 1976 after attending a Sex Pistols gig at the Manchester Free Trade Hall in June that year.[1] The band went on to feature over 60 different members, and released 32 studio albums.[2] Smith’s lyrical style has been described as consisting of “grim, dark and ironic humour”.[3] Notoriously difficult to work with, he has been characterised as a “strange kind of antimatter national treasure”,[4][5] and an enduring cult icon.[6] In 2018, he died at the age of 60 after a long illness. 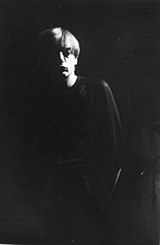 Smith was born into a working-class family in Broughton, Salford, Lancashire, England, as the oldest of four siblings-he had three sisters.[7] The family moved to nearby Prestwich when he was six months old. In his autobiography, Smith claims that Alfred Henry Hook – a soldier who fought at Rorke’s Drift – was an ancestor of his father, leading to the Smith family being invited as guests of honour to the Whitefield showing of the film Zulu in which Hook was played by James Booth.[8] He attended Stand Grammar School before leaving at 16. That year, he left home and moved in with his girlfriend, Una Baines.[7] He subsequently took an evening class in A-level Literature.[9] His first job was in a meat factory, before he became a shipping clerk on the Manchester docks.[10] Originally a Labour supporter, he then joined the Socialist Workers Party.[11] Smith’s father, Jack, died suddenly in 1989 of a heart attack.[12]

Smith formed The Fall, named after the novel by Albert Camus,[13] with friends Martin Bramah, Una Baines and Tony Friel (who coined their name) after dropping out of college at the age of 19.[14] Originally they were named The Outsiders, after another Camus work. He gave up his job as a shipping clerk at Salford docks shortly afterward to devote his full energies to the band, and continued to do from then on. Smith married American guitarist and Fall band member (1983–89 and 1994–96) Brix Smith on 19 July 1983, after meeting during the band’s American tour earlier that year.[15] They divorced in 1989, and he remarried twice after this. His second wife was Saffron Prior, who used to work for the Fall’s fan club. He married Eleni Poulou, also called Elenor or Elena, in 2001. Poulou joined the band in September 2002[16] and resigned in July 2016.[17]

Musically, Smith’s influences vary from 60s British groups such as The Move and The Kinks, to American artists such as The Doors, The Seeds and Captain Beefheart and the German group Can.[18] The band built a steady cult following; he wrote in his autobiography that “You’ve got to accept that you’re never going to be on Top of the Pops every week if you’re in the Fall. That’s not what the Fall’s about.”[7]

When British DJ and Fall supporter John Peel died in 2004, Smith made a notorious appearance on the BBC‘s Newsnight show.[19]

In January 2005, Smith was the subject of The Fall: The Wonderful and Frightening World of Mark E. Smith, a BBC Four television documentary.[7] The following August he received the “Contribution to Music” award at the Diesel-U-Music Awards.[20] Smith’s autobiography, Renegade: The Gospel According to Mark E. Smith, written with Manchester-based writer Austin Collins, was published by Viking Books in April 2008.[21]

Smith’s cryptic lyrics,[24] were described by critic Simon Reynolds as “a kind of Northern English magic realism that mixed industrial grime with the unearthly and uncanny, voiced through a unique, one-note delivery somewhere between amphetamine-spiked rant and alcohol-addled yarn.”[25] In interviews, Smith cited Colin Wilson,[26] Arthur Machen, Wyndham Lewis, Thomas Hardy,[27] Philip K. Dick as influences,[28] as well as Edgar Allan Poe, Raymond Chandler,[29] and H. P. Lovecraft, whose short story “The Colour Out of Space” he read in Christmas 2007 for the BBC Collective website.[30]

Alongside his work with the Fall, Smith released two spoken-word solo albums, The Post-Nearly Man (1998) and Pander! Panda! Panzer! (2002). Both albums feature readings of Fall lyrics, samples of Fall songs and contributions from members of the Fall.[6]

Smith appeared as a guest vocalist for Edwyn Collins, Elastica, Gorillaz, Long Fin Killie, Mouse on Mars, Coldcut and Ghostigital. His contribution to Inspiral Carpets‘ 1994 song “I Want You” won UK top 20 recognition, topped the Festive Fifty[31] and resulted in Smith’s first appearance on the classic UK TV show Top of the Pops.[32] He worked with Mouse on Mars on the collaboration project Von Südenfed (whose first album, Tromatic Reflexxions, was released in May 2007),[14] provided guest vocals on the song “Glitter Freeze” from the Gorillaz album Plastic Beach, and joined the group Shuttleworth to record the World Cup song “England’s Heartbeat”.[33]

In 1986, he wrote the play Hey, Luciani based around the short reign of Pope John Paul I.[34] Smith was also periodically a guest contributor to publications including the NME. He appeared in an acting role in several television programmes and films. He made a cameo in the Michael Winterbottom film 24 Hour Party People (2002), while his younger self was portrayed by Sam Riley[35] in a section that was deleted from the final cut of the film, but is featured as a deleted scene on the DVD. Smith made an appearance in the BBC Three sitcom Ideal in May 2007, playing a foulmouthed, chain-smoking Jesus.[36]

A fuzzy, muted version of the song “Hip Priest” appeared in the film The Silence of the Lambs.[37]

Smith wrote the music for a Michael Clark Dance Company ballet in 1988, called I Am Curious, Orange, which debuted in Amsterdam and is about Prince William of Orange.[38]

Other collaborations and guest appearances[edit]