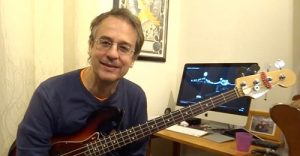 Matthew Seligman (14 July 1955 – 17 April 2020) was an English bass guitarist, best known for his association with the new wave music scene of the 1980s.[1] Seligman was a member of The Soft Boys and the Thompson Twins, and was a sideman for Thomas Dolby. Seligman was also a member of Bruce Woolley & The Camera Club and The Dolphin Brothers, and backed David Bowie at his performance at Live Aid in 1985.

Seligman was born in Cyprus, and his family moved to Wimbledon, England eight months after his birth. Influenced by Paul McCartney, Free’s Andy Fraser, and Tina Weymouth of Talking Heads, he learned bass.

Seligman was a founding member of Bruce Woolley and the Camera Club, which also included his friend Thomas Dolby. He played on the band’s 1979 debut album English Garden, which featured a version of “Video Killed the Radio Star“, which Woolley had co-written with The Buggles.[2] After leaving The Camera Club in 1979, Seligman joined The Soft Boys, replacing founding bassist Andy Metcalfe, and performed on their second album Underwater Moonlight.[3] The Soft Boys broke up in 1980, and Seligman next formed the short-lived band The Fallout Club, which also included Dolby. After The Fallout Club disbanded after two singles, Seligman joined the Thompson Twins, and appeared on their 1982 album Set and its American counterpart In the Name of Love.[3] Seligman was fired from the Thompson Twins later that year when the band decided to reduce itself to a trio.[4] Seligman then joined Dolby’s solo group, and played bass on his albums The Golden Age of Wireless (1982) and The Flat Earth (1984) and the hit single “She Blinded Me With Science“.[3]

In addition to his work with Dolby throughout the 1980s, Seligman was also a member of the bands Local Heroes SW9 and The Dolphin Brothers. He also played bass on the first two solo albums by his former Soft Boys band mate Robyn Hitchcock.[5]

In 2002, Seligman played at the Shanghai Festival with Snail, along with Chris Bell and Jonathan Klein, and in 2007 began working with the Fire Escapes. In 2011–12 he contributed to Thomas Dolby’s A Map of the Floating City also appearing with him on tours of the UK and northern Europe, at the Blue Note in Tokyo in February 2012 and at the Latitude Festival, Suffolk, the UK in July 2012. In 2014, with fellow Fire Escapers Mark Headley and Lucy Pullin, he completed the Magical Creatures’ Wishing Machine collection, also appearing live with them at a summer 2016 William Burroughs-inspired launch party in Brighton, UK.

Seligman always played a black Fender Jazz bass as his first choice instrument. In addition he has used an Ibanez with a C-ducer contact mic built into the back of the neck, close to the neck/body junction, for his fretless work primarily with Thomas Dolby, but also Peter Murphy and in the ambient collection Sendai, recorded with Japan/Hong Kong-based musician Jan Linton for the March 2011 Tōhoku earthquake relief fund, and released by Entropy Records in 2012.

Seligman was also a lifelong Fulham F.C. fan. After a lifetime in the UK, he moved to Sendai in northern Japan in early 2005 and, after a four-year spell back in the UK, returned there in July 2012. He then practiced as a human rights solicitor in London, where son Deji and daughter Lily also reside.

In early April 2020, Dolby reported that Seligman had been placed in an induced coma in St George’s Hospital London, after having been diagnosed with COVID-19.[9] On 17 April, Dolby posted on his Facebook page that Seligman had suffered a “catastrophic haemorrhagic stroke” from which he was not expected to recover; Seligman died later that day.[3]

Seligman performed on the following albums, either as an official band member or a sideman[6]:

with Bruce Woolley and the Camera Club

with The Soft Boys

with The Dolphin Brothers