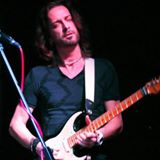 Casswell started playing the guitar from the age of 11. In the mid-80s he was signed to RCA USA as a part of a band called Heroes.[2][3] From the late 80’s to the early 90’s he was signed to MCA UK with the British rock band Walk on Fire, which released an album Blind Faith in 1989.[4] In 1992, he joined the Brian May Band for the South America tour.[5] Casswell co-wrote and co-produced Cozy Powell’s last solo album Especially for You that was released from Polygram Records in 1998.[6] From 2006 to 2008, Casswell played in the West End Queen musical We Will Rock You.[7] Casswell has also taught guitar through many DVDs from Lick Library with an emphatic focus on classic rock and blues styles. Since 2011, he has been regularly contributing to Guitar Interactive magazine with columns, gear reviews and interviews.[8][9][10][11][12]
In 2014, Casswell released a solo album entitled Complaints about the noise.