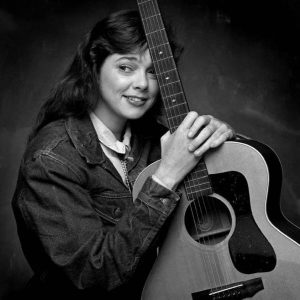 Nanci Caroline Griffith (July 6, 1953 – August 13, 2021) was an American singer, guitarist, and songwriter,[1] raised in Austin, Texas, who lived in Nashville, Tennessee. Griffith appeared many times on the PBS music program Austin City Limits starting in 1985 (season 10). In 1990, Griffith appeared on the Channel 4 programme Town & Country with John Prine, where she performed at The Bluebird Cafe in Nashville, along with Buddy Mondlock, Robert Earl Keen, and Barry “Byrd” Burton.

Griffith was born in Seguin, Texas,[2] and her career spanned a variety of musical genres, predominantly country, folk, and what she termed “folkabilly.”[1] Griffith won a Grammy Award for Best Contemporary Folk Album in 1994 for her recording, Other Voices, Other Rooms. This album features Griffith covering the songs of artists who were her major influences. One of her better-known songs is “From a Distance,” which was written and composed by Julie Gold, although Bette Midler‘s version achieved greater commercial success. Similarly, other artists have occasionally achieved greater success than Griffith herself with songs that she wrote or co-wrote. For example, Kathy Mattea had a country music top five hit with a 1986 cover of Griffith’s “Love at the Five and Dime” and Suzy Bogguss had one of her largest hits with Griffith’s and Tom Russell‘s “Outbound Plane“.

In 1994, Griffith teamed up with Jimmy Webb to contribute the song “If These Old Walls Could Speak” to the AIDS benefit album Red Hot + Country produced by the Red Hot Organization. Griffith was a survivor of breast cancer which was diagnosed in 1996, and thyroid cancer in 1998.[3]

I was struck by how perfect everything was about her singing, her playing, her talking. I realized from the get-go that this was someone who was a complete professional. Obviously she had worked a long time to get to be that good.[4]

In recent years,[when?] Griffith toured with various other artists, including Buddy Holly‘s band, The Crickets; John Prine; Iris DeMent; Suzy Bogguss; and Judy Collins. Griffith recorded duets with many artists, among them Emmylou Harris, Mary Black, John Prine, Don McLean, Jimmy Buffett, Dolores Keane, Willie Nelson, Adam Duritz (singer of Counting Crows), The Chieftains, John Stewart; and Darius Rucker (lead singer of Hootie & the Blowfish). She also contributed background vocals on many other recordings.[5] Griffith suffered from severe writer’s block for a number of years after 2004, lasting until the 2009 release of her The Loving Kind album, which contained nine selections that she had written and composed either entirely by herself or as collaborations.[citation needed]

After several months of limited touring in 2011, Griffith’s bandmates The Kennedys (Pete & Maura Kennedy) packed up their professional Manhattan recording studio and relocated it to Nashville, where they installed it in Griffith’s home. At this location, with her backing group, including Pete & Maura Kennedy and Pat McInerney, she co-produced her album Intersection over the course of the summer. The album included several new original songs and was released in April 2012 on Proper Records.[6]

On June 25, 2019, The New York Times Magazine listed Griffith among hundreds of artists whose material was reportedly destroyed in the 2008 Universal fire.[7]

Griffith won the 1994 Grammy Award for Best Contemporary Folk Album for Other Voices, Other Rooms. Griffith was awarded the Kate Wolf Memorial Award by the World Folk Music Association in 1995.[8] In 2008, the Americana Music Association awarded her its Americana Trailblazer Award. Lyle Lovett, who contributed backing vocals to some of “The Blue Moon Orchestra’s” recordings,[which?] had won it before her.

Griffith referred to her backing band as “The Blue Moon Orchestra”. This reference is believed to have been drawn from both the title of one of her earliest albums, Once in a Very Blue Moon,[citation needed] and its title selection, which reached number 85 on the Billboard Hot Country Songs chart in 1986.