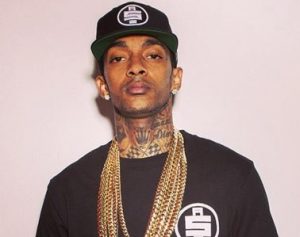 Ermias Davidson Asghedom (August 15, 1985 – March 31, 2019), known professionally as Nipsey Hussle (often stylized as Nipsey Hu$$le), was an American rapper and songwriter from Los Angeles, California. Emerging from the West Coast hip hop scene in the mid-2000s, Hussle initially became known for his numerous mixtapes, including his Bullets Ain’t Got No Name series, The Marathon, The Marathon Continues and Crenshaw, the latter of which rapper Jay-Z, bought 100 copies for $100 each.[4] After much delay, his debut studio album Victory Lap was released in February 2018 to critical acclaim and commercial success, and was nominated for Best Rap Album at the 61st Annual Grammy Awards in 2019.[5][6][7][8]

Hussle was shot and killed outside his store, Marathon Clothing, in South Los Angeles on March 31, 2019.[9]

In 2005, Hussle gave his first mixtape, titled Slauson Boy Volume 1, which soon became the name of his own record label.[10] In 2008 Hussle released two mixtapes, Bullets Ain’t Got No Name, Vol. 1 and Vol. 2,[11] after signing with Cinematic Music Group and Epic Records.[12][13] In 2009, he released his debut single, “Hussle in the House”. Later that year, Nipsey released a third mixtape Bullets Ain’t Got No Name, Vol. 3. He then collaborated with Drake on the song “Killer”,[14] and also appeared, along with Snoop Dogg and Problem[15]on the song “Upside Down”, which featured on his 2010’s album Malice n Wonderland.[citation needed]

In 2010, Hussle appeared on the song “We Are the World 25 for Haiti“,[16] and was chosen to be the part as one of the XXL Magazine‘s “Annual Freshman Top Ten”, a selection of ten up-and-coming artists.[17] XXL labeled him “Most Determined” of his class, and LA Weekly called him the “next big L.A. MC”.[18][19] Hussle was expected to release his debut album, South Central State of Mind, in October 2010. Prior to release, the album was supported by the single “Feelin’ Myself” featuring Lloyd. While the production was set to be handled from J.R. Rotem, Scott Storch, Mr. Lee, Play-N-Skillz, Terrace Martin and 1500 or Nothin’, the album was set to be featured with the guest appearances from Trey Songz, Jay Rock and Sean Kingston. Concurrently, he announced that he plans on releasing a mixtape with a fellow rapper Jay Rock, titled Red and Blue Make Green.[20] Following the release of a music video for “Feelin’ Myself”, the album was set for a December 21, 2010 release; however, both these projects were eventually postponed indefinitely.[21]

After going through trouble with Epic Records, Hussle was released from the label in late 2010. After his release, he went on to found his own record label, All Money In.[19][22] On December 21, 2010, he released his first All Money In Recordsmixtape, titled The Marathon,[23] which features guest appearances from Kokane and MGMT.[24] On November 1, 2011 Hussle released a sequel titled The Marathon Continues, which features L.A. rappers YG and Dom Kennedy.[citation needed]

In 2012, it was rumored that Hussle would be signing to Rick Ross‘s Maybach Music Group (MMG) label.[25] Nipsey made a guest appearance on a fellow rapper YG‘s 2012 single “B*tches Ain’t Sh*t”, which samples the classic Dr. Dre song of the same name and also features Young Money rapper Tyga and Snoop Dogg.[26] The song debuted on the US BillboardHot 100 at number 100 and on the Heatseekers Songs chart at number 11.[27] On April 17, 2012, Hussle released a collaborative album with a fellow rapper Blanco, titled Raw. The album features guest appearances from YG, Mistah FAB, Yukmouth, B-Legit, Kokane and Freeway.[28] In May 2012, he released a single “Proud of That”, which features guest vocals from Rick Ross.[29] He was also featured on MMG’s song “Fountain of Youth”, which appears on the label’s second album Self Made Vol. 2.[30] The music video was released on October 1, 2012.[31] In December 2012, Hussle hinted more at the signing with Maybach Music Group/Warner Bros. Records, it was but said that he would still be looking for the right label.[32]

Hussle said that he would be releasing his third and final installment of The Marathon mixtape series with TM3: Victory Lap in 2013, after it was pushed back from its initial December 2012 release date.[33] He also announced that he was planning on releasing a mixtape with a fellow West Coast rapper and frequent collaborator YG, titled Two of America’s Most Wanted in 2013. It was set to feature Dom Kennedy and DJ Mustard.[34] Hussle performed at the 2013 Paid Dues festival on March 30, 2013 in California.[35] After deciding against signing to a major label, due to a lack of creative freedom, he choose to make Victory Lap his debut album.[36]

On September 16, 2013, Hussle announced that he would be releasing his new mixtape Crenshaw (hosted by DJ Drama), on October 8, 2013.[48] On September 24, 2013, he revealed the track list for Crenshaw, which contained guest appearances from Rick Ross, Dom Kennedy, Slim Thug, James Fauntleroy II, Z-Ro, Skeme and Sade, among others. The production on the mixtape was handled by The Futuristics, 1500 or Nothin’, 9th Wonder, Mike Free, Ralo and Jiggy Hendrix, among others. He also released the “Crenshaw” documentary that day in promotion of the mixtape.[49] On October 2, 2013, Hussle released two greatest hits compilation albums to iTunes, Nip Hussle the Great Vol. 1 and Vol. 2.[50][51] On October 3, 2013, he released another trailer for the mixtape, also revealing 1,000 hard copies of the mixtape would be sold for $100 each.[52][53] He reportedly sold out all 1,000 copies in less than 24 hours, effectively making 100,000 dollars.[54]

Upon the release of Crenshaw, Hussle said that Victory Lap would be released in 2014.[55] On October 14, 2013, Hussle told Complex that the first single from Victory Lap would be titled, “Rap Niggas” and was ready for release.[36] On November 20, 2013, Hussle confirmed that Victory Lap features the productions from Ralo, 1500 or Nothin’, The Futuristiks and DJ Mustard.[56] He later confirmed more producers, including Don Cannon and DJ Khalil on the album.[57]In 2016, he released Famous Lies and Unpopular Truth.[58] He commented on the 2016 US presidential election by releasing the single FDT with YG.[59] On February 16, 2018, Hussle released his debut studio album Victory Lap.[60]

In 2007, Hussle played a small role in Bone Thugs-N-Harmony‘s semi-autobiographical film I Tried, which was directed by Rich Newey. In 2010, he starred in the film Caged Animal, alongside Ving Rhames, Gillie Da Kid and Robert Patrick.[61][62] In 2015, Hussle was featured in The Sexy Getting Ready Song in the pilot episode of Crazy Ex-Girlfriend, rapping two bars before abruptly stopping and commenting on Rebecca Bunch (Rachel Bloom)’s long grooming routine as ‘some nasty-ass patriarchal bullshit’. In 2016, he launched “The Marathon Agency” with business partners, Karen Civil, Jorge Peniche and Steven “Steve-O” Carless.[63]

According to police sources, on March 31, 2019, Hussle was shot multiple times in the parking lot of his store, Marathon Clothing, on 3420 West Slauson Avenue in South Los Angeles at about 3:25 p.m. Two others were wounded in the shooting.[71][72] All three victims were transported to a hospital, where Hussle was pronounced dead. He was 33 years old.[73] Upon hearing the news, multiple athletes, actors, and musicians offered their condolences on social media.[74][75]Sources state that one suspect fled in a vehicle.[76]