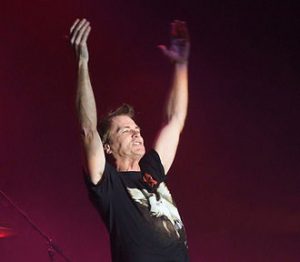 Pat Torpey (December 13, 1953 – February 7, 2018) was an American hard rock drummer and singer, known as the drummer and backing vocalist of the hard rock band Mr. Big. He has also played for John Parr, Belinda Carlisle, Robert Plant, Montrose, Richie Kotzen and The Knack. Pat has recorded with Impellitteri and Ted Nugent. He is noted by Neil Peart for composing unique rhythms such as that of “Take Cover”, a rock song from Mr. Big.[citation needed]

Torpey was born in Cleveland on December 13, 1953. At age 7, he first played the drums. “I was at a family and friends picnic and there was a polka band. I was sitting on a railing behind the drummer and was fascinated at what I saw and heard. I went home and fashioned my own ‘signature’ drum sticks out of a fallen tree branch from our front yard”, he later recounted.

In high school, Torpey immersed himself in all available music programs, concert, orchestra, marching and stage bands. About his teenage years, he says: “I wanted to play everything percussion and I convinced my mother to buy me a used drum-kit for my thirteenth birthday.” His family moved to Phoenix, Arizona, where he then began honing his skills in local bands, from rock, to funk, to jazz, to pop.

Beginnings of his career[edit]

In 1983, Torpey moved to Los Angeles. He recounts the beginning of his career: “I’m a pretty good softball player and joined an entertainment league, and through that I was able to make some new friends and network my way into a couple of gigs. I became a regular on the American Bandstand and Solid Gold TV shows performing with Ben E. King, Mike + The Mechanics, Melissa Manchester, Bob Geldof, and a few I can’t even remember.”[attribution needed]

1985, Torpey auditioned for the British pop–rock singer John Parr, who was riding high on his #1 hit “St. Elmo’s Fire” and had landed the opening slot for Tina Turner on her Private Dancer tour. When that tour ended he became the drummer for Belinda Carlisle on her first solo tour, opening for Robert Palmer.

Pat narrates further, “1987, I was doing a television show with Roger Daltrey and Bobby Columby from Blood, Sweat and Tearsapproached me and asked me if I was available to do some studio work. Columby was producing a couple tracks for The Knack, and their original drummer had just left the band. I loved their music and what great fun for a drummer. They asked me to join the band.”[attribution needed]

Mr. Big secured a recording contract with Atlantic Records but before the band started work on the first CD Torpey was tapped to play drums with Robert Plant on his Now and Zen tour when Plant’s drummer Chris Blackwell was injured.[1] “Led Zeppelin was such a huge influence and the guys in Mr.Big knew what a fantastic opportunity it was and they gave me their blessing. “Communication Breakdown’ every night, what a rush!!!”

In 1992, Mr. Big’s international hit song “To Be With You” was no.1 in the U.S. and fifteen other countries and top five in many more. For fourteen years Mr. Big toured the world, headlining as well as opening for Aerosmith, Rush, Bryan Adams and The Scorpions to name a few, garnering a reputation for their world class musicianship and totally ‘live’ performances.

Pat Torpey has been noted as a great backing vocalist (with high vocal range) and he often sings some cover songs in the Mr. Big show during his encore. Also he sings some tunes from The Beatles during his drum solo. Because of Mr. Big’s popularity in Japan and Asia, Pat released two solo albums (as a singer) overseas, Odd Man Out and Y2K in 1998 and 1999.

He announced on July 25, 2014 that he had been diagnosed with Parkinson’s disease and would be unable to perform all of his normal drumming duties on the band’s 2014-15 world tour in support of the album …The Stories We Could Tell.

“I’ve been dealing with Parkinson’s symptoms for the past couple of years and only recently received a confirmed diagnosis as symptoms worsened,” Torpey said. “I intend to fight the disease with same intensity and tenacity that I drum and live my life by and will continue recording and performing, as always, to the best of my ability.”

Torpey died from complications of Parkinson’s Disease at the age of 64 on February 7, 2018.[3]

Pat uses Tama drums, Zildjian cymbals, and Promark Sticks. During his time with Mr. Big, he used Tama Artstar drums and can be seen in almost all the photos and videos of his drums. More recently, he has been using Tama Starclassic drums as the Artstar series has been discontinued.

Following Mr. Big’s apparent breakup, Torpey had been involved in myriad studio projects, live performances at clinics for Tama drums in Japan, Russia, China, Indonesia, Philippines and many other parts of the world.

Pat Torpey played for the reformed version of Montrose, the “new” band stepped for a memorable debut performance at the Los Angeles Key Club on April 29, 2002 in honour of Ozzy Osbourne and Mötley Crüe drummer Randy Castillo.

In 2004, he toured with Richie Kotzen as drummer for his UK club tour and South American leg; he also played with Billy Sheehan in Johnny Hiland’s first self-titled album, Johnny Hiland. Pat returns to The Knack in the same year.

In the end of 2006, Pat joined “The Exile Social Club”, a particular kind of band that relives old Rock’n’Roll hits. This band is formed also by Chuck Wright, from Quiet Riot, Jason Hook and David Victor.

In January 2009, Pat Torpey reunited with his old Mr. Big band-mates Eric Martin, Paul Gilbert and Billy Sheehan for a reunion tour.[citation needed] In 2010, they recorded and released the album “What If…” with producer Kevin Shirley.[4] 2011 saw them back together for a world tour supporting the new album.[5]