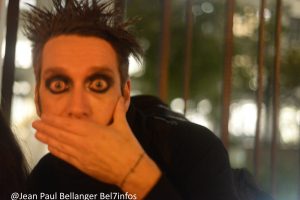 Sam Wills (born 28 August 1978) is a New Zealand prop comic, busker, clown, and mime residing in Las Vegas. He performs under the name The Boy With Tape On His Face[1] and, more recently, as Tape Face.[2] He was also half of the two-person act Spitroast and sometimes performed under his own name, Sam Wills.[3] He has been featured in the New Zealand International Comedy Festival,[4] the World Buskers Festival,[5] and was a finalist on Season 11 of America’s Got Talent.[6]

Wills began his performing career in Timaru at the age of thirteen while he trained as a clown. He uses a diverse range of performance styles and skills. He holds a diploma in New Circus from Christchurch Polytechnic Institute of Technology‘s Circus School where he has taught juggling for two years. His interest in the phenomenon of traditional circus freak shows and influences such as the Jim Rose Circus and the Tokyo Shock Boys led to experiments with shock comedy, earning him his first Pulp Comedy appearance, the Best New Face award for the 2001 season, and he was called ‘Prince of Cringe’ from Truth and TV Extra magazine.[citation needed]

Wills met his future wife, English burlesque performer Felicity Redman (also known as Lili La Scala), in 2007.[7] They had a “symbolic wedding” on 9 January 2009, in Christchurch as a start to that year’s World Buskers Festival in the same spot on the banks of the Avon River where they got engaged a year earlier. This was followed by a legal wedding later that year in England.[8] Their first son, Rafferty Basil Danger Wills, was born in January 2013.[7]

Wills rarely gives interviews to maintain the impression of not speaking, which was created by taping his mouth for performances. His media strategy is modelled on Kate Moss, who is also not available for interviews.[9] 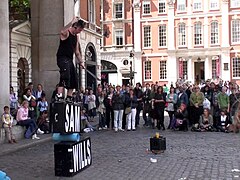 Wills performed as the MC of the Late Club at the Auckland Festival in 2005 (AK05) and for First Night at the Aotea Centre.[citation needed] He also performed at the World Buskers’ Festival in 2004, 2005 and 2008.[5][8] He was a regular performer on Pulp Comedy, during its three seasons on TV2.[10] He performed on the red carpet for the World Premier of The Lord of the Rings: The Return of the King in Wellington.[11] He was the support act for David Strassman‘s 2003 tour of New Zealand.[citation needed] He has also performed at private functions for the former New Zealand Prime Minister Helen Clark and the King of Tonga George Tupou V.[citation needed] In the UK he made an ITV appearance on Comedy Rocks hosted by Jason Manford (2011), and also appeared at the first BBC Comedy Prom at London’s Royal Albert Hall on 13 August 2011 (broadcast on BBC 2 on 27 August 2011).[12][13] On 5 December 2011 he performed at the 83rd annual Royal Variety Performance, alongside Tim Minchin and others.[14][15]

In the Season 11 premiere of America’s Got Talent (AGT) on 31 May 2016, shortening his stage name to Tape Face, Wills auditioned and got through to the next round.[16] In Week 8 of AGT, during the Judges’ cuts round, Wills successfully auditioned through to the live shows.[17] In Week 1 of the AGT quarterfinals, he advanced to the semifinals.[18] He advanced to the finals on 31 August 2016 by getting the most audience votes in the Dunkin’ save, but was later eliminated on 14 September when he did not reach a top five spot.[citation needed] Maria Karvouni of Forbes magazine wrote that Tape Face revives silent film acting, using his facial expressions and body movements to captivate his audience: “His simplicity creates a complexity which results in a lot of laughter.”[19] He appeared in a show with America’s Got Talent Season 11 winner Grace VanderWaal and runner-up The Clairvoyants in a three-night concert series at Planet Hollywood Resort & Casino in Las Vegas, Nevada, in October 2016.[20] He also appeared in 2019 on Week 4 of America’s Got Talent: Champions, on Monday, 28 January, where he placed in the top 4 of that night’s acts.