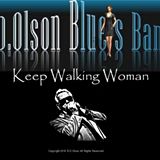 It’s a long way from the Minnesota farm country and playing polka dances to playing the Blues with Chico Chism in the Phoenix heat, but R.D Olson has managed to compile a nice resume with more than 30 years behind the drum kit and playing a mean harp as back up.
“I was raised in a little farm town called Zumbrota about 50 miles from Minneapolis, Minnesota,” R.D., says. “It all started when I was about 16 years old. I’d go to bed and get under the covers and listen to the Rolling Stones on the radio. I wasn’t supposed to be playing the radio on a school night. It was a little farm town with little farm town rules.
“Then I heard Muddy Waters on this late-night show that used to come out of Little Rock (Ark.),” R.D., recalls. “That stuff really affected me. My days playing drums at polka dances were over. I had this friend who had a fabulous Blues record collection. He turned me on to all of the great Blues players and I was hooked for life.
“I moved up to Rochester (Minn.) when I was 17 and was playing in a Blues band,” he says. “We weren’t very good but we were trying out best. You gotta start somewhere. Along the way I got married which didn’t last all that long. Then it was work all day and play music at night and on the weekends. During that time I met Mojo Buford, who was Muddy’s harp player. He had about 7 or 8 kids and was playing in Muddy’s band to support them. Every once in a while he’d strike out on his own but the money was much better with Muddy.
“He started giving me harp lessons,” R.D. recalls. “It was no big deal but I wanted to learn how to play and he was willing to teach me. I also got to meet Muddy which was a thrill. In 1977 I sat in with Luther Allison on drums and was asked to finish a tour. Then he asked me to go on tour with him in France and I turned him down. It’s always been one of my big regrets not going with him.”
A new wife and baby forced RD to get out of the music business for a while.
“I had moved to Madison (Wis.) by that time with a new wife and a baby,” he says. “I would still play occasionally. And, that was about the time I heard Stevie Ray and about Austin and I went down there to see it for myself. I called the wife and told her to start packing, we were moving down there. I loved everything about it, The (Fabulous) Thunderbirds, Sixth St., Antone’s. Kim Wilson is still my favorite harp player. The jams at Antone’s were just fantastic. You really had to know somebody to be able to sit in. There was just too much talent already there.”
Next stop on the R.D. Olson odyssey was the Valley of the Sun and the Chico Chism experience.
“I met Chico when I got to Phoenix and started playing with him and Bobby Dixon, Willie’s son,” R.D. says. “Everybody knew Chico used to be Howlin’ Wolf’s drummer. There are tons of stories about Chico and some are partially true and some total fiction. He was quite a character. Anyway, I played harp for a while and then switched to drums which let Chico get out front and do his thing. I got to meet Willie Dixon, who was getting old by that time and wasn’t very active. It was just a casual introduction but it was still Willie Dixon. Then we opened for Buddy Guy which was a treat.
“Bobby (Dixon) would play piano for three or four gigs and then be gone,” R. D. says. “Some nights I played both harp and drums. We had Tim Dustin on guitar and “The Mad Man” Ted Kowal on bass. This was before Ted started Cold Shott (& The Hurricane Horns). Then the band started to break away from Chico. We started calling ourselves Crossfire which later turned into Cold Shott.”
Today R.D makes his home in Sedona and operates a landscape design business as well as playing Blues in the area clubs.
“I had moved to Laughlin to work because times were hard,” he says. “I was a single dad raising two kids after their mother bowed out of the picture. I laid out of music for a while to get the kids raised because they were the priority. Then I took a job designing the landscape at one of the resorts in Sedona, liked it and stayed. It’s a beautiful place to live. Besides, the people in Sedona found our music to be a refreshing change of pace.”
Currently R.D.’s putting tracks together for a new CD due out sometime in mid to late summer.
“We’ve got Buddy Reed on guitar,” he says. “He’s a great player with a lot of history. Eric Williams plays piano. He can play five different instruments. Hooter plays bass on some tracks. He’s been playing for a long time and has toured with some of the best in the business. Jimmy Waldron also plays some bass. He took off to North Dakota looking for work and is now back to stay. On drums we have Frank Rossi, who is a great Chicago-style drummer. He can really lay it down.
“I want this record to sound like vintage Chicago Blues and I think I’ve found the players to make it happen. We should be finished with the tracks in July and hope to release the CD on or before the Blues Showdown in September.
“I’ve decided since the kids are grown I’m going to hit the road and play some gut-bucket Blues.