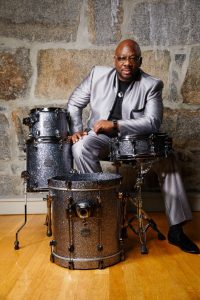 Ralph Peterson Jr. (born May 20, 1962) is an American jazz drummer and bandleader.

Four of Peterson’s uncles and his grandfather were drummers. Peterson himself began on percussion at age three. He was raised in Pleasantville, where he played trumpet at Pleasantville High School and worked locally in funk groups. He applied to Livingston College and Rutgers to study drums, but he failed the percussion entrance exam and enrolled as a trumpeter instead, graduating in 1984.[1]

He began recording as a leader in 1988, with a quintet (Terence Blanchard, Steve Wilson, Geri Allen, and Phil Bowler) on V and Volition. He also worked with Allen and Bowler as a trio in “Triangular”; Essiet Essiet replaced Bowler for the 1988 Triangular recording. In 1989 he recorded in the quartet format as “The Fo’tet” with Don Byron, Steve Wilson (later Bobby Franchesini), Melissa Slocum (later Belden Bullock), and Bryan Carrott. After living in Canada for some time, he returned to Philadelphia, where he worked again with “The Fo’tet”, and recorded as Triangular 2 with Slocum and Uri Caine. He also led the group “Hip Pocket”, with whom he played trumpet.

Peterson has taught at Berklee College of Music in Boston[2] and University of the Arts in Philadelphia. In 2010, Peterson took another bold step with the start-up of his own Onyx Productions Music Label.