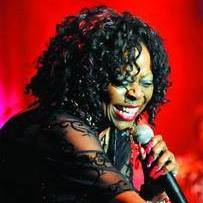 For other uses, see Ramp (disambiguation).

RAMP (an acronym for Roy Ayers Music Productions) is an American soul/jazz band from Cincinnati, Ohio.[1][2] It was founded in 1976 by Roy Ayers, who was not a member of the group, though he did write and produce songs on their single but iconic album. The band consisted of Sharon Matthews and Sibel Thrasher on vocals, Landy Shores on guitar, Nate White on bass, and John Manuel on drums and percussion. The band are joined in the present day by Kia Bennett and Desiree Jordan.

The group released one studio album, Come Into Knowledge, subsequently considered a classic among rare-groove collectors, artists (such as Erykah Badu, Mary J. Blige, Common, PM Dawn, A Tribe Called Quest and many others who have used RAMP samples in their music)[3] and Roy Ayers fans.

Come Into Knowledge was recorded at Electric Lady Studios in New York City and at Record Plant in Hollywood, California. The group was a vehicle for the songwriting talents of Ayers and Edwin Birdsong. Released in 1977 via ABC Blue Thumb, the set featured a version of Ayers’ “Everybody Loves the Sunshine” along with the ‘rare groove’ track “Daylight”. The LP record release of the album commands very high prices. The album was eventually reissued and re-released on CD in 2007 by P-Vine Records in Japan and by Verve Records in Europe and the United States.[4]

The group split up shortly afterwards, but reformed in 2006 for new tours and recordings. RAMP performed on June 30, 2007, with Washington, D.C. jazz pianist Will Rast, at the Central Park SummerStage in New York City.

In 2008, the song “Daylight” featured Grand Theft Auto IV on the fictional radio station The Vibe 98.8.