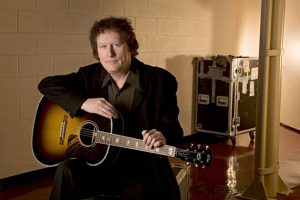 Randy Lynn Scruggs (August 3, 1953 – April 17, 2018) was a music producer, songwriter and guitarist. He had his first recording at the age of 13. He has won a Grammy Award and was twice named “Musician of the Year” at the Country Music Association Awards.[1] He is the middle son of Earl Scruggs.

As a songwriter, Scruggs’s credits include “We Danced Anyway“, “Love Don’t Care (Whose Heart It Breaks)“, “Love Has No Right“, “Don’t Make It Easy for Me“, “Chance of Lovin’ You“, and “Angel in Disguise“.

Scruggs has worked with many artists, including Michael Card, The Talbot Brothers, Waylon Jennings, George Straitand Emmylou Harris. His career dates back to the 1970 with the release of All the Way Home, a collaboration with his older brother Gary. Scruggs recorded his debut solo LP, Crown of Jewels, in 1998. He played the electric bass on John Hartford‘s 1972 album Aereo-Plain.

In 1994, Scruggs teamed up with Earl Scruggs and Doc Watson to contribute the song “Keep on the Sunny Side” to the AIDS benefit album Red Hot + Country produced by the Red Hot Organization.