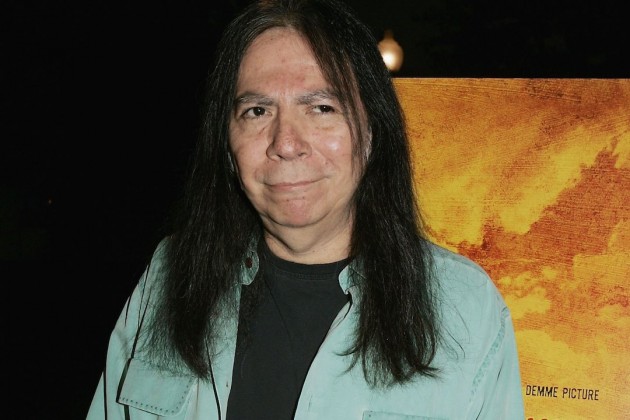 Rick (“Rick the Bass Player”) Rosas (September 10, 1949 – November 2014) was an American musician, and one of the most sought after studio session players in Los Angeles. He has played with Neil Young, Joe Walsh, Crosby, Stills, Nash & Young, Jerry Lee Lewis, Johnny Rivers, Ron Wood, Etta James, and the short-lived reunion of the Buffalo Springfield among others.

He was born in West Los Angeles, California to Anne & Bob Rosas, originally from Tempe, Arizona. Growing up in East Los Angeles, he listened to Elvis, the Everly Brothers & watched the country swing music of Spade Cooley on TV. His first band was Mark & the Escorts, an East L.A. that began by playing surf instrumentals. The three core members, Mark Guerrero, Rick Rosas, and Ernie Hernandez, eventually recorded an album for A&M Records in the early 70s, as members of a rock band called Tango. [1]

He met Joe Walsh through drummer Joe Vitale, in the early 80s and played on Walsh’s 1985 album, The Confessor. Rosas also joined Walsh for a short-lived stint in Australia as a member of the Creatures from America, that also featured Waddy Wachtel on guitar and Richard Harvey on drums. He also toured with Dan Fogelberg in 1985. In December of 1986, the Walsh band joined Albert Collins and Etta James for the a Jazzvisions taping called “Jump the Blues Away.”

While playing in Walsh’s touring band, Rick met Neil Young at the Farm Aid III benefit. Young was impressed with the bass player’s musical skill as well as his soft-spoken, laid back manner, and invited him to join his new horn-driven big band, the Bluenotes.

With this band, Young the album, This Note’s For You. Rosas appeared in the video of the title track that was initially banned by MTV. When it became a hit on other music video outlets, MTV reversed itself and put the video in rotation. It won the MTV Video Music Award for Best Video of the Year for 1989. [2]

After disbanding the Bluenotes, Young retained Rosas for a power group that recorded an EP, Eldorado. It was only released in Japan and Australia, to coincide with their Young & the Restless Far East Tour in early 1989. Rosas played a throbbing bass line on the rocker, “Rockin’ in the Free World” which appeared on 1989’s Freedom.

Rosas reunited with Joe Walsh in 1989 for an MTV Unplugged taping with Dr. John and played on Walsh’s 1991 Ordinary Average Guy and 1992 Songs for a Dying Planet. Young invited Rosas to play on Prairie Wind in 2005. He also appeared in the album-release concert movie filmed at the Grand Ole Opry House, Heart of Gold. [3] He would play on Young’s next album, Living with War and the subsequent 2006 “Freedom of Speech” tour with Crosby, Stills, Nash & Young,[4] that resulted in the film, “’CSNY/Déjà Vu” and concert album, Déjà Vu Live.

Rosas played on Young’s next album, Chrome Dreams II which finally saw the release of the 1988 Bluenotes track “Ordinary People.” He also provided backing vocals for the track “Dirty Old Man.” He toured with Young’s Electric Band throughout America, Europe, and Asia for nearly three years, playing material from nearly every phase of Young’s catalogue. A concert film, Neil Young Trunk Show, directed by Jonathan Demme, captured a 2007 performance in Philadelphia. In one scene Young praises Rosas’ musical abilities, “Rick can play anything!” Another Young album, Fork in the Road was recorded during the tour, which ended with a Hyde Park performance in London with Paul McCartney joining Young onstage for a cover of the Beatles’ “A Day in the Life“.

A year later Young invited Rosas to participate in the reunion of the Buffalo Springfield at that year’s Bridge Concert. He and drummer Joe Vitale joined the remaining original members Young, Stephen Stills and Richie Furay. A six show mini-tour followed in June of 2011 with concerts in Oakland, Los Angeles, Santa Barbara and the Bonnaroo music festival but a planned fall tour was cancelled.[5] While touring with Pegi Young & the Survivors, he got the call from Neil Young to fill in for Crazy Horse bassist Billy Talbot, who had suffered a mild stroke a few weeks before their 2014 European Tour, making Rosas the only bassist to have played with Buffalo Springfield, Crosby, Stills, Nash & Young and Crazy Horse. [6]

Rosas stayed busy as a session player and he had been the bassist for the Waddy Wachtel Band since 2000.

Rosas was married twice. He was an accomplished cook, having studied under chef Ken Frank at the Wolfgang Puck/Patrick Terrell Ma Maison School of Cooking from 1983-1985.

Crazy Horse drummer Ralph Molina announced on his Facebook page on 6 November 2014 that Rick Rosas had died at age 65. Neither the cause of death nor exact date was given.[7]