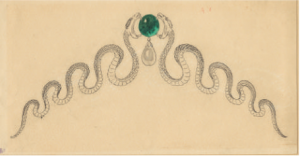 Chaumet, the famous Parisian jewellery design house since 1780 will exhibit 38 drawings never previously seen from its print room for the Salon du Dessin in Paris March 21-26. The salon is the world’s premier event for the art of drawing and takes place annually in Paris.

A visit to Chaumet offers the chance to explore links to the brand’s prestigious clients who have included Marie Louise,Empress of the France, Napoléon’s wife, and the New York oil heiress and billionaire Gertrude Vanderbilt, among many other famous names from the past through to today for whom it has designed fabulous jewels and to view its changing styles from the Empire to the present day. Chaumet will be opening in Bond Street, London shortly.

Chaumet’s archives include nearly 80,000 drawings covering more than two centuries of history and jewellerycreation. The art of drawing at Chaumet: Imagining – Creating, is a selection around tiaras, the emblem of the house, showing the excellence of its creation through the centuries. These 38 drawings, some of which are shown in public the first time, show the extraordinary richness of the heritage of one of the oldest jewellery companies of Paris.

The history of Chaumet has been entwined with the History of France ever since its founding in 1780, in Paris. Indeed, the Maison very quickly became the official jeweller to Empress Josephine. The High Jewellery savoir-faire of theMaison has been passed down through generations of jewellers for 235 years. Crafted at the very heart of the placeVendôme, the jewellery and watchmaking creations reflect these exceptional skills and pay tribute to the Parisian style.