Wednesday July 17th Seven Eleven is playing at Le Trianon, the historic theatre and music-hall in heart of the Montmartre district, followed by a concert of George Clinton & Parliament/Funkadelic.

It will be the sixth time the Dutch funkateers of Seven Eleven are performing in Paris. The band’s first show in the ‘City of Light’ was on September 17th 1999 at the Uncut Funk Festival which was held in the famous jazz club New Morning. It was an unforgettable experience, especially for manager/guitarist Dice and his girlfriend Priscilla who stayed one day longer to see the artists on the third and last day of the festival.

After midnight, on their way back to the hotel, they suddenly found themselves in the middle of a shooting. One block away from New Morning a man came out of a bar, followed by another man who started shooting at the first one. Hidden behind a parked car Dice and Priscilla waited until the shooting was over, and hurried to their hotel.

It took almost five years for Seven Eleven to perform in Paris again: the Hot ‘n’ funky-tour held in 2004 included three shows in Paris and its vicinity. On February 13th Seven Eleven was headliner in New Morning; on June 6th the band funked up Disney Village from the open air stage, and on September 11th Seven Eleven played at the Fête de l’Humanité. Recordings of that concert were released on cd a few years later.

In 2005 the band did only one show in Paris: at La Maroquinerie, with the talented French group ‘Dood’ as support-act.

So, finally Seven Eleven is going back to Paris. It’s about time! 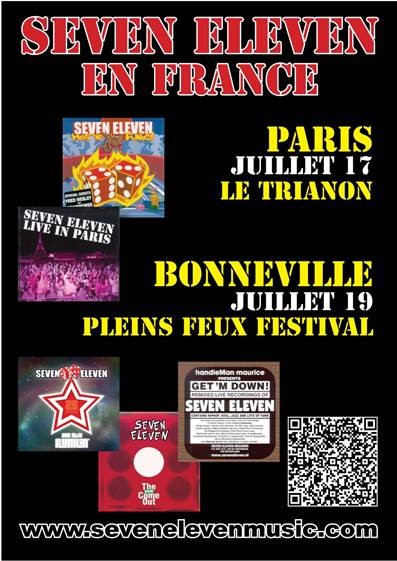 Duplessy & The Violins of The World