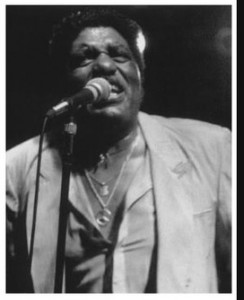 Sad News!! R.I.P. SIR MACK RICE
I saw a post on FB just now saying that Sir Mack Rice has passed away. As well as being a talented artist in his own right, he was one of the stable of songwriters that wrote for Stax Records back in the day. Some may remember him from his days with the amazing R&B group, The Falcons, and many people know him as the guy who wrote Wilson Pickett’s hit, “Mustang Sally.” He also wrote Johnny Taylor’s “It’s Cheaper To Keep Her,” The Staple Singers “Respect Yourself,” and the autobiographical “Cadillac Assembly Line” for Albert King, as well as the perennial Christmas favorite in my house, “Santa Claus Wants Some Lovin’,” among many others. He has left us a tremendous legacy of music! He was a sweet guy, and I have always felt privileged to have worked with him… My condolences to his family. R.I.P. Sir Mack Rice!

Take a listen to the story of Mack’s early life as told by Albert King:

Bonny “Mack” Rice (November 10, 1933 – June 27, 2016), sometimes credited as Sir Mack Rice, was an American songwriter and singer.[1] His best-known composition, and biggest hit as a solo performer, was “Mustang Sally.” He also wrote “Respect Yourself” with Luther Ingram.

Rice was born in Clarksdale, Mississippi. He began his work in the R&B field in the 1950s based in Detroit, performing with the Five Scalders in 1956 and with the Falcons, a group whose members included Eddie Floyd, Wilson Pickett and Joe Stubbs, from 1957 to 1963.[2] He performed as a solo vocalist in the years to follow, but his biggest successes were as songwriter for other artists on labels like Stax and others in the 1960s and following decades. He began his solo vocalist career at Stax in 1967, recording on Atco Records beginning in 1968. Rice is one of the few musicians whose career touched both Motown and Stax Records.

As a solo recording artist, he had two chart hits: “Mustang Sally”, which reached number 15 on the Billboard R&B chart in 1965, and “Coal Man”, which reached number 48 on the soul music chart in 1969.[3] Besides “Mustang Sally”, which also became a major hit for Wilson Pickett in 1966, and “Respect Yourself”, a hit for the Staple Singers, his other songs include “Betcha Can’t Kiss Me (Just One Time)”, “Cheaper to Keep Her”, “Cadillac Assembly Line”, “Money Talks”, “Cold Women With Warm Hearts”, “Do the Funky Penguin, Pt. 1”, “It Sho Ain’t Me”, and “Santa Claus Wants Some Lovin'”. His compositions have been performed by many well-known artists, including the Staple Singers, Ike and Tina Turner, Albert King, Johnnie Taylor, Shirley Brown,Rufus Thomas, Etta James, Billy Eckstine, Eddie Floyd, Buddy Guy, The Rascals, The Kingsmen, Wilson Pickett, Albert Collins, Busta Rhymes, Lynyrd Skynyrd, Otis Clay and The Blues Brothers (in Blues Brothers 2000).

In 1992, backed by the soul band The Dynatones, Rice released his first solo album, Right Now on Blue Suit Records, recorded and mixed by Steve Scharren at Scharren Studios in Toledo, Ohio. On it he reprised a number of his hit songs along with a mixture of new tunes.

Rice continued to live in the Detroit area. He died at home in Detroit on June 27, 2016, aged 82, from complications of Alzheimer’s disease.[2]