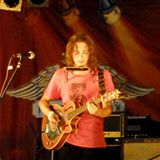 SOBO is an International rock-n-blues band integrating American, Russian and Middle Eastern influences.
Based in the Holy City of Jerusalem, SOBO has an International Message of Freedom.
In February 2017 SOBO set out to play their respects and participate in the International Blues Challenge held in Memphis TN.
SOBO had huge success and were acknowledged by the judges, audience and their peers making it all the way to the finals held in the world famous Orpheum Theatre.
This is the first time a band from Israel has made it to the Finals and a big rarity for any non American band.
SOBO are very proud to call themselves IBC Finalists.