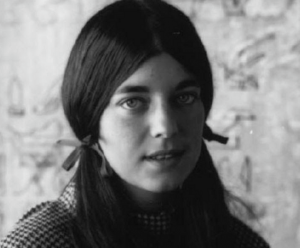 Signe Toly Anderson (September 15, 1941 – January 28, 2016) was an American singer who was one of the founding members of Jefferson Airplane, the Americanrock band.

Born in Seattle, Signe Toly was raised in Portland, Oregon, and was a locally known and well-respected jazz and folk singer before joining Jefferson Airplane after a trip toSan Francisco. Soon after joining the Airplane, she married one of the Merry Pranksters, Jerry Anderson, a marriage that lasted from 1965 to 1974. She sang on the first Jefferson Airplane album, Jefferson Airplane Takes Off, most notably on the song “Chauffeur Blues“. Anderson distrusted the Airplane’s original manager, Matthew Katz, and refused to sign a contract with him until he inserted a special escape clause freeing her from him if she left the band for any reason.[citation needed]

Anderson in July 1966 informed Bill Graham that she was quitting the band after a series of shows they were playing in Chicago, realizing that bringing her newborn child, with then-husband Jerry Anderson, on the road wasn’t feasible. Graham, however, asked her to stay with the band through the October shows at Winterland in San Francisco, which she agreed to.[1] This gave the band time to search for her replacement, eventually choosing Grace Slick after Sherry Snow declined their offer.[2]Allegedly there were other factors such as the hostility of other band members towards her husband (see the book Got A Revolution – The Turbulent Flight of Jefferson Airplane).

Anderson’s last live performances with the Jefferson Airplane were two sets on October 15, 1966 at The Fillmore. Both performances were recorded (as were most Fillmore shows) and have surfaced on some bootleg albums. In August, 2010, Collector’s Choice music in cooperation with Sony finally released the second show on a legitimate CD issue. At what seemed to be the end of the second set, Marty Balin returned to announce that Anderson was leaving the group. Her goodbye to the fans, recorded for posterity, was as follows: “I want you all to wear smiles and daisies and box balloons. I love you all. Thank you and goodbye.” At several fans’ request, Anderson and the band performed her signature number, “Chauffeur Blues.” They finished the night with “High Flying Bird,” and thus ended Anderson’s tenure with the Airplane. The band returned to play two more shows the following night with Grace Slick on board for the first time.

This entire performance was officially released in 2010 as Jefferson Airplane: Live at The Fillmore Auditorium 10/15/66 Signe’s Farewell. The tracklisting is the following:

After leaving the Airplane she returned to Oregon where she sang for nine years with a ten-piece band, Carl Smith and the Natural Gas Company. In the mid 1970s she recovered from cancer. In 1977 she married local building contractor Michael Alois Ettlin, and continued to sing with Carl Smith. In the mid 1990s, Anderson suffered further serious health problems. While she recovered from these ailments her family faced serious financial problems from the costs involved.

She had made guest appearances with the KBC Band and Jefferson Starship.