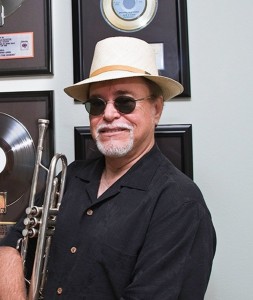 Wayne Jackson (November 24, 1941 – June 21, 2016) in West Memphis, Arkansas, was an American soul and R&B musician, playing the trumpet in the Mar-Keys, in the house band at Stax Records and later as one of The Memphis Horns, “arguably the greatest soul horn section ever”.[1][2]

Together with Andrew Love, he created the signature horn sound at Stax on hit records by Otis Redding, Sam & Dave, and others.

After the years recording at Stax, they incorporated themselves into The Memphis Horns and began freelancing, recording on sessions for such artists as Neil Diamond,Elvis Presley, Al Green, and Dusty Springfield. The duo also toured with The Doobie Brothers, Jimmy Buffett, Robert Cray, and numerous other performers.

In 2012, the Memphis Horns received a Grammy Lifetime Achievement Award for outstanding artistic significance in music.[3]

Jackson died on Tuesday, June 21, 2016 at Methodist University Hospital in Memphis of congestive heart failure. [4] His death came after several years of failing health during which he still maintained an active schedule earning an income by giving personalized guided tours at the Stax Museum of American Soul Music. He was 74.

Memphis Horns’ Wayne Jackson dies at 74
Trumpeter Wayne Jackson — part of the famed Memphis Horns, member of the influential instrumental group the Mar-Keys, and a key cog in the Stax Records…
Partager
COMMERCIALAPPEAL.COM