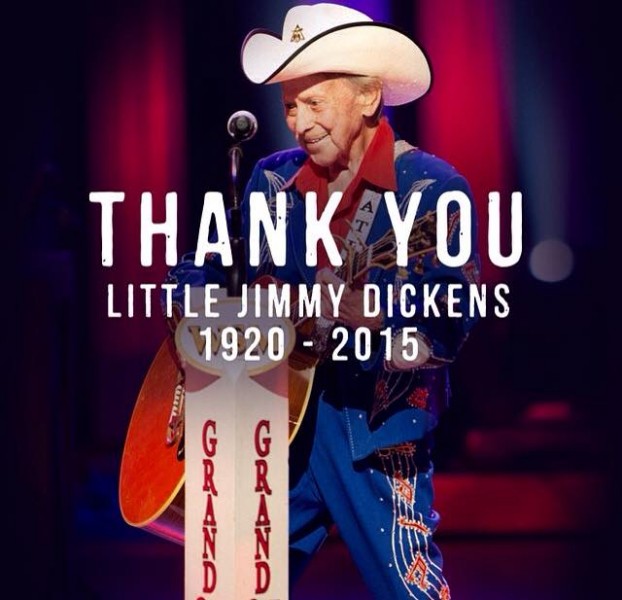 We are so sad today. We have lost our friend and Hero of the Grand Ole Opry Little Jimmy Dickens. We will miss him everytime we walk on the Opry stage. Rest in Peace – avec Kelly Morris, Cher Basilio Ceriaco,Teena L. Welch-deGrandpre et Matt VanderMey

James Cecil Dickens (December 19, 1920 – January 2, 2015), better known as Little Jimmy Dickens, was an American country music singer famous for his humorous novelty songs, his small size, 4’11” (150 cm), and his rhinestone-studded outfits. He started as a member of the Grand Ole Opry in 1948 and became a member of the Country Music Hall of Fame in 1983.

In 1948, Dickens was heard performing on WKNX, a radio station in Saginaw, Michigan by Roy Acuff, who introduced him to Art Satherly at Columbia Records and officials from the Grand Ole Opry. Dickens signed with Columbia in September and joined the Opry in August. Around this time he began using the nickname, Little Jimmy Dickens, inspired by his short stature.

Dickens recorded many novelty songs for Columbia, including “Country Boy”, “A-Sleeping at the Foot of the Bed”, and “I’m Little But I’m Loud”. His song “Take an Old Cold Tater (And Wait)” inspired Hank Williams to nickname him “Tater”. Later, telling Jimmy he needed a hit, Williams penned “Hey Good Lookin’” specifically for Dickens in only 20 minutes while on a Grand Ole Opry tour bus. A week later Williams cut the song himself, jokingly telling him, “That song’s too good for you!” In 1950, Dickens formed the Country Boys with musicians Jabbo Arrington, Grady Martin, Bob Moore and Thumbs Carllile. It was during this time that he discovered future Country Music Hall of Famer Marty Robbins at a Phoenix, Arizonatelevision station while on tour with the Grand Ole Opry road show. In 1957, Dickens left the Grand Ole Opry to tour with thePhilip Morris Country Music Show.

In 1964, Dickens became the first country artist to circle the globe while on tour, and also made numerous TV appearances, including on The Tonight Show Starring Johnny Carson. In 1965, he released his biggest hit, “May the Bird of Paradise Fly Up Your Nose“, reaching No. 1 on the country chart and No. 15 on the pop chart.

In the late 1960s, Dickens left Columbia for Decca Records before moving again to United Artists in 1971. That same year, he married his wife, Mona, and in 1975 he returned to the Grand Ole Opry. In 1983. Dickens was inducted into the Country Music Hall of Fame.

Dickens joined producers Randall Franks and Alan Autry for the In the Heat of the Night cast CD “Christmas Time’s A Comin’”, performing “Jingle Bells” with the cast (the CD was released on Sonlite and MGM/UA and was one of the most popular Christmas releases of 1991 and 1992 with Southern retailers).

Toward the end of his life, Dickens made appearances in a number of music videos by fellow country musician and West Virginia native Brad Paisley. He was also featured on several of Paisley’s albums in bonus comedy tracks, along with other Opry mainstays such as George Jones and Bill Anderson. They are collectively referred to as the Kung-Pao Buckaroos.

With the death of Hank Locklin in March 2009, Dickens became the oldest living member of the Grand Ole Opry at the age of 90. He made regular appearances as a host at the Opry, often with the self-deprecating joke that he is also known as “Willie Nelson after taxes.” At the 2011 CMA Awards, Jimmy was dressed up as Justin Bieber, and made fun of Bieber’s then-current paternity scandal.